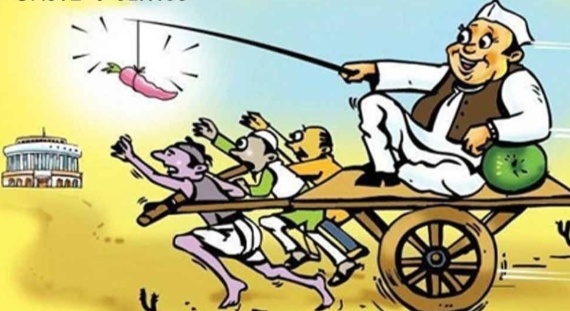 Lust for power and the ingrained belief that they were born to rule, is the bond that unites the majority of Hindu upper-caste more than any ideology or religious affiliations. So their association with one political party or the other remains fluid depending on which way the wind is blowing. That is why we see those who at one point educate us on the virtues of secularism, suddenly start seeing it as another tool of appeasement of minorities. The shameless exodus of Congress MLAs to BJP and lack of any outrage on this blatant mockery of people’s mandate is only reflective of this broader understanding within the establishment. One should not be surprised, therefore, when a spokesman of the Aam Admi Party speaks a language reminiscent of Kapil Mishra. Muslims are cannon fodder in this game of Hindu upper caste domination.

It is no secret that nearly all mainstream political parties in India are dominated by the upper caste. Those who organised OBCs and SC/STs and enjoyed a decade or so of power with minorities consolidating behind them have been put on the back foot by the selective use of ED, CBI, IT and other agencies. Those who were not ready to compromise are languishing in jails while convicted murderers like Maya Kondani & Babu Bajrangis are out on bail.

Muslims are being punished for destabilising this age old accepted power balance of Hindu society by aligning with OBCs and SC/ST dominated parties post Mandal. This is what has irked the upper caste most, that instead of voting en mass to perpetuate their rule and get some lip service or some insignificant posts here & there we supported those who were “lower” in their eyes to rule a vast area of the land.

More than the often-repeated Shah Bano case or Babri Masjid issue, it was this political realignment that has angered the establishment and that is why this talk of “showing Muslims their place”.

Should Muslims have adopted the pragmatic approach that their forefathers adopted Post partition in not attempting to change the status quo or power balance of Hindu society? Or it was only right for them to stand with the oppressed people of the land demanding social justice?

On another hand, some Muslim Pasmanda activist are propagating a theory that only Muslims that are suffering at the hand of Hindutva regime are Padmanda Muslims. As if the lynch mobs let Mohsin Sheikh, Pehlu or Rakbar Khan go because they were from the so-called Ashraf caste. They suggest that Muslims from Pasmanda communities should align with Ambedkarites and OBC activists to oppose both Hindu and Muslim upper caste domination (if there is a Muslim upper caste domination). They equate murderous thugs of Hindutva with Muslim political/religious voices, young or old to appear balanced. If you read their posts it seems they have all their hatred directed at fellow Muslims. Some find the root of the caste system in the religion and blame Islam itself just to appease Ambedkarites as if there was an organised Muslim Varna system backed by scriptures.

They need to be reminded that Lalu, Mulayam or Mayawati enjoyed wholesome support of Muslims from all sections till their own caste people were charmed away by the pied Piper of Gujarat to serve the interests of upper castes.