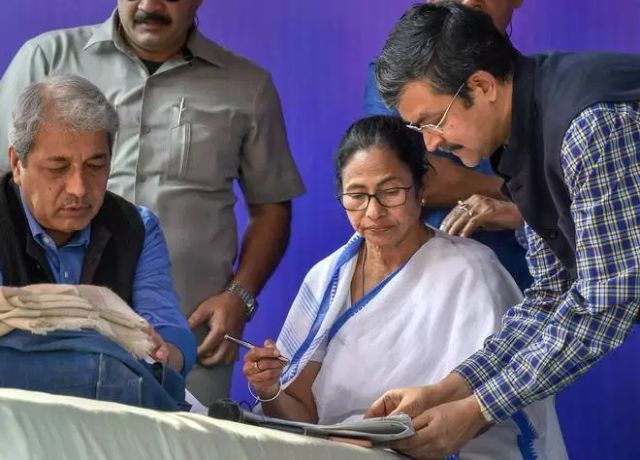 Kolkata/New Delhi : The unprecedented stand-off between the Narendra Modi government and the Mamata Banerjee government in West Bengal stretched to the second day on Monday as the feisty Chief Minister continued her sit-in, emboldened by the support from opposition parties from various states, some of them even joining her on the dais.

The action-filled confrontation that began on Sunday evening when CBI officials showed up near the Loudon Street residence of Kolkata Police Commissioner Rajeev Kumar for questioning him in connection with the probe into the ponzi scheme scam, also rocked Parliament and reached the legal corridors in both New Delhi and the eastern metropolis.

Banerjee, flanked by her senior ministers and top Trinamool Congress leaders, skipped dinner and stayed up the entire night on a makeshift dais in the Dharamtala area, near the Metro Y Channel after beginning the protest around 9 p.m. on Sunday.

On Monday, Banerjee seemed completely at ease doing what she has always revelled in – street protest – and yet again lent her full backing to Kumar, a 1989 batch IPS officer who had headed the Special Investigation Team formed to probe the Ponzi scam in 2013, a year before the CBI took over the case following Supreme Court’s order.

Banerjee claimed that the centre is tagging the honest people as thieves while the “real thieves” are at large.

” I was peeved when they tried to get to Rajeev Kumar… He is leading the force. If Kumar is thief, whose money has he taken?” she asked.

She claimed her “Satyagraha” was “non-political” and not against an individual agency but to oppose the “anarchic moves” by the Modi government to destroy democracy.

“Our protest is against the attempts to divide the country and spread hate, intimidation and terror among people,” she said, as her party activists put up rail and road blockades at various parts of the state, took out protest rallies with back flags and burnt Modi’s effigy.

Banerjee claimed she was getting support from across the country and said the demonstration might continue till February 8. Interestingly, Modi is scheduled to address a public meeting in north Bengal on that day.

Meanwhile, the strength of the Central Reserve Police Force troopers deployed at the CBI offices at Nizam Palace and the CGO Complex in Salt Lake on Sunday night, was bolstered on Monday with one more company pressed into service.

“We have come here to provide security to the CBI personnel and the documents kept here,” said a CRPF trooper on condition of anonymity.

On the other hand, in a tit for tat move, the Kolkata Police served a notice to CBI joint director and head of zone (Kolkata) Pankaj Kumar Srivastava in connection with “wrongful restraint” and “wrongful confinement” of two businessmen in August last year.

Srivastava, who left for Delhi during the day with documents to help CBI lawyers in the legal fight at the Supreme Court, said he would consult his lawyers before responding to the notice.

In New Delhi, Solicitor General Tushar Mehta sought an urgent apex court hearing on Monday itself on a CBI plea describing the situation as “extraordinary”, and fearing “evidence will be destroyed”, but Chief Justice Ranjan Gogoi declined it saying “there’s no evidence of what you’re saying right now”.

The court said it would hear the matter on Tuesday.

“If you show one proof they are tampering or even remotely thinking of it, we’ll come down so heavily that they will regret it,” said Gogoi.

In Kolkata, the state government approached the Calcutta High Court pleading for an urgent hearing against the CBI’s attempt to question Rajeev Kumar at his residence despite a stay order from the court.

However, Justice Shivakant Prasad listed it for Tuesday.

Both the Rajya Sabha and the Lok Sabha witnessed uproar as opposition parties led by the Trinamool Congress protested vehemently against the CBI raid in Kolkata, calling it a misuse of the agency against political opponents, forcing the presiding officers to adjourn the Houses for the day.

Prior to the adjournment, Rajnath Singh defended CBI action, and told the Lok Sabha that the move to stop the central probe agency from performing its duties is “unlawful” and a threat to the country’s federal system.

Senior BJP leaders questioned why Banerjee was going all out to save Kumar.

Human Resource Development Minister Prakash Javadekar asked whether she wanted to save herself or the top cop, while Law Minister Ravi Shankar Prasad said Kumar was being protected as he knew some “secrets”.