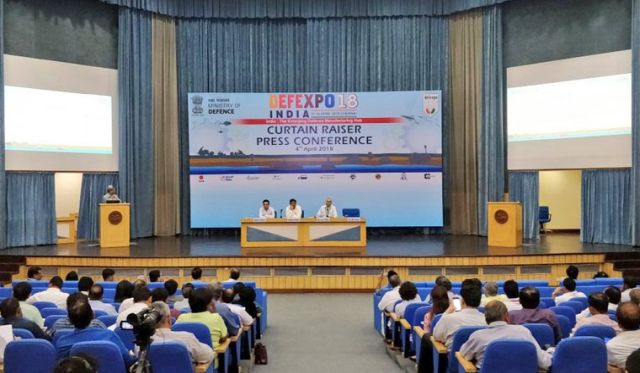 The four-day DefExpo 2018 that opens outside Chennai on April 11 has been innovatively and generously showcased as “India: The Emerging Defence Manufacturing Hub” and a large number of platforms and military inventory items manufactured in India will be on display.

The Chennai event is the 10th in the DefExpo series and hopes to position the country as a credible manufacturer and exporter of certain military inventory items and this focus on export as opposed to importing military hardware marks a conceptual shift in Indian defence policy.

Military aircraft and naval ships will be part of the Indian hardware that will be showcased, along with artillery guns. The Ministry of Defence (MoD) expects that this forum will be able to attract foreign buyers who may find the Indian option more affordable.

Concurrently, all the major arms exporters of the world, barring China, will be in Chennai and more than 40 countries are expected to participate in DefExpo 2018. This has been the pattern for the last two decades since DefExpo was first launched in New Delhi and the event attracts a high level of attention, for India is seen as a major market for the global arms manufacturers.

It is perhaps more coincidence than design that when Delhi is seeking to project itself as a credible manufacturer of major platforms and a potential exporter of such inventory, the Indian Air Force has announced (April 6) that it is re-opening the procurement process for 110 fighter aircraft. This is an order that is potentially worth $12 billion and will attract the attention of the global aviation industry.

But there is also a sense of déjà vu, for India had embarked upon a long-drawn process to procure 126 fighter aircraft during the earlier United Progressive Alliance (UPA) regime. This process began in 2007 and was abandoned in 2015 — a year after the current National Democratic Alliance (NDA) came to power — for the Indian higher defence eco-system was not enabling as it ought to have been. The principal players are the Prime Minister’s Office, the ministries of defence and finance and the three service headquarters, and for the last two decades a sense of stasis has engulfed Raisina Hill apropos defence procurement and manufacture.

Has this complex eco-system with its labyrinth of regulations and compliance-seeking strictures become more enabling under current Defence Minister Nirmala Sitharaman? An objective answer to this will determine the long-term outcome of the DefExpo.

In keeping with the tagline of the expo, the MoD announced a very ambitious draft Defence Procurement Policy (DPP) 2018 in March with the objective of placing India among the top five defence producing nations of the world. This is a highly desirable objective and can be the catalyst and opportunity for realising the Modi vision of Make in India in the defence sector in a substantive manner.

India is likely to allocate $150 billion over the next decade for procurement and modernisation of military hardware and this can provide the stimulus to nurture meaningful domestic manufacture in some niches areas. However, the feasibility of realising this goal by 2025 can be an exceedingly daunting challenge, given the very modest national manufacturing-cum-R&D base and related eco-systems that India currently has in place.

Defence manufacture in India has largely been within the purview of the public sector undertakings (PSUs), which do not function as per free-market compulsions. However, the track record of the last quarter century (1991-2016) has revealed that these defence PSUs are unable to produce what the Indian military needs in a cost- and time-effective manner — and hence the reality that India is the world’s largest importer of arms.

Manufacturing in the defence cannot be seen in isolation and has to be part of a larger national eco-system that is enriched by the private sector, academia and investment from financial institutions in a sustained manner. However, the reality is that for decades, the contribution of the manufacturing sector in India’s overall GDP has hovered in the 15 to 18 percent range, notwithstanding exhortations that this figure touch 25 percent. Indian R&D investment is slender and patents of international rigour are very few.

As part of this initiative, it is expected that India would be able to invest Rs 700 bn ($10.85 billion) in the defence manufacturing sector and thereby create up to three million jobs. Sitharaman has announced the setting up of two dedicated defence corridors — one in Uttar Pradesh and the other in Tamil Nadu — and it will be instructive to note how swiftly the state governments will be able to create the necessary conditions (land acquisition, provision of water/electricity, et al) for the action to begin in earnest.

This vision of DPP 2018 being realised in its entirety by 2025 will call for intense inter-ministerial coordination and an “all of government approach” that India has not seen to date. Hence this initiative represents a major opportunity to enhance the indigenous component in India’s military inventory and also raise the national manufacturing base, even while providing employment opportunities to at least two million people.

This is as win-win an outcome as can be envisaged, but the fact is that this has remained elusive for years. The Congress-led UPA government had also unveiled a Defence Production Policy document in 2011, but it remained dormant and did not yield the expected results. One hopes that the Chennai DefExpo will be the catalyst to make that critical difference — thereby imparting some credibility to India’s desire for “strategic autonomy” in the global arena. Otherwise the make-believe will continue, as it has, alas, for decades.

(C. Uday Bhaskar, is Director, Society for Policy Studies. The article is in special arrangement with South Asia Monitor. He can be contacted at cudayb@gmail.com)

Kashmir witnesses 346 killings, 88 gunfights in one year after Aug 2019: Report