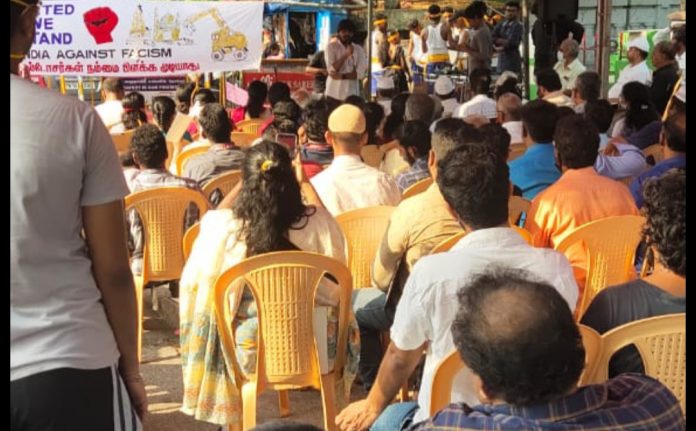 Chennai May 1, 2022: The anti-encroachment drive carried out by the bulldozer that targeted the Muslims in the communal violence-hit Jahangirpuri area of Delhi had its echoes in this Southern megapolis where a peaceful protest was organized on the May Day at the Valurkottam, the permanent protest site in the city.

The protest was organized by the concerned citizens of Chennai and was supported by several Non-governmental organizations. It was attended by a few hundred people to whom speakers addressed the issue of jungle raj prevailing in many parts of the country.  The common theme in the speeches made today was that BJP rule is on the demolition drive of the constitutional values of the country. 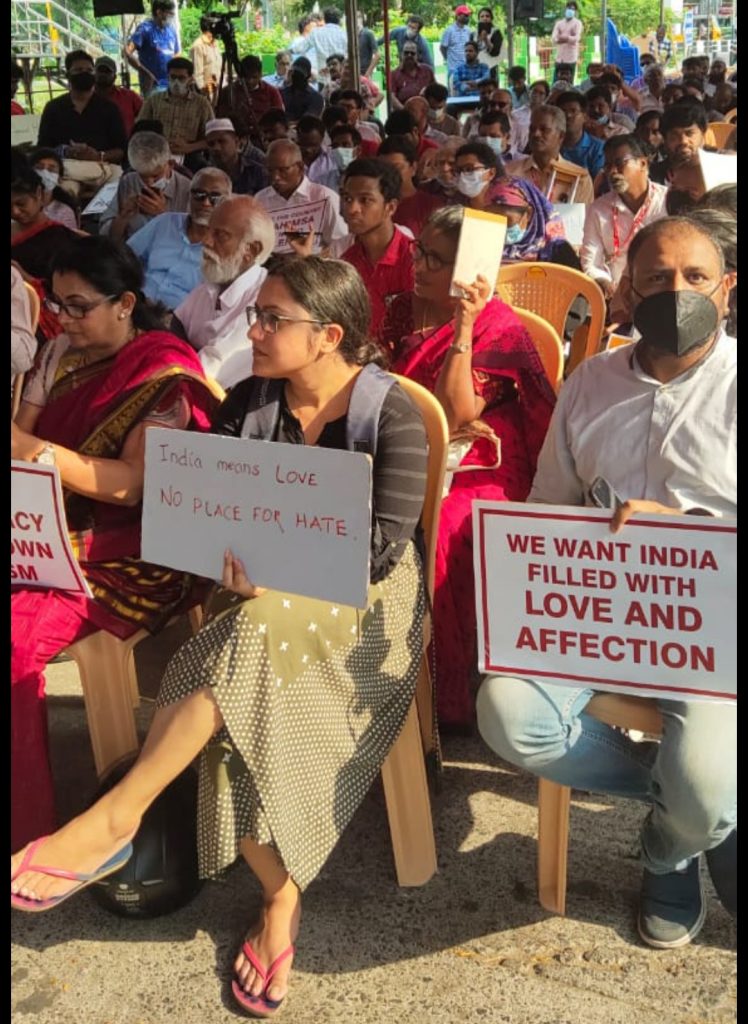 One of the speakers who described the sequence of events on April 16 and 21 said that “on April 16, Hindus took out Shobha Yatra procession as part of Hanuman Jayanti festival that traversed through the Muslim populated Jahangirpuri area. When the procession reached a mosque an altercation took place between those in procession and the local Muslims. This made way for hate sloganeering by both communities and to stone-pelting incidents and violence.”

“Thereafter on April 21, Jahangirpuri witnessed seven bulldozers moving into its neighborhood apparently on orders of the BJP-led North Delhi Municipal Corporation, razing several Muslim houses, belonging to Muslims alleged to be stone palters on April 16 event. The bulldozers not only demolished the poor Muslims hoses but also the exterior gate of the mosque where the heated argument took place between the Hindus and Muslims,” the speaker said.

The act of demolition of the Muslim houses by the bulldozer was nothing but a reflection of the BJP’s hatred against the Muslims, said Vignesh, of Makal Pathi, an organizer of today’s protest.

‘The BJP is giving the message that it does not subscribe to the constitutional values but to hooliganism to polarize the communities, said one of the senior citizens present during the protest. He added that the incident such as the one in Jahangirpuri, at Delhi, is taking the country to the dark ages.”

The speakers of today’s protest made an appeal to the government and the political parties not to be silent spectators to the unsavory developments going on in the country. All the concerned citizens must unite to dislodge the current government in Delhi that’s hell-bent on creating a Hindu- Muslim rift in the country.