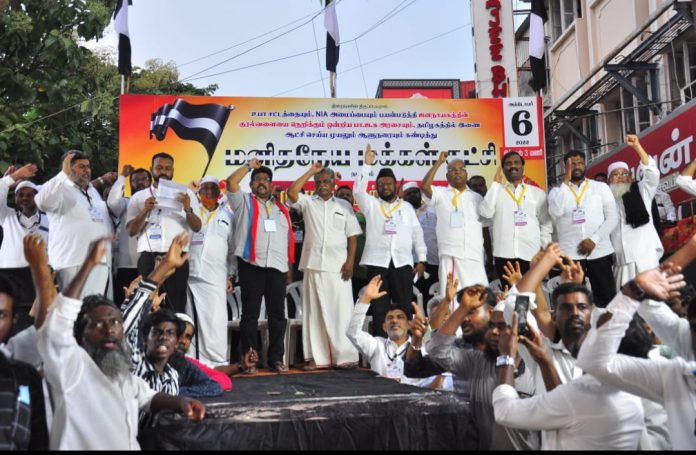 Chennai/Madurai: Massive people’s Protest programme was organised today at Chennai and Madurai on behalf of Manithaneya Makkal Katchi to protest against the high-handed approach of the Union BJP Government in using the Unlawful Activities Prevention Act (UAPA) and National Investigation Agency (NIA) to crush the democratic rights of Minorities and to demonstrate against the undemocratic action of the Governor R. N. Ravi in trying to unconstitutionally meddle with the administration of the elected DMK Government to create a parallel administration. Police did not give permission for these demonstrations. Braving hardship thousands thronged and participated in the demonstration.

UAPA law is unfit to be enlisted as a law in the statute books of any Democratic Nation. UAPA law is an atrocious draconian law that overrides all values of natural Justice. The due process of law demands that the police prove the guilt of the arrested individual but in UAPA as an unusual feature the imprisoned individual is expected to prove his innocence an aspect not to be seen in any part of the world. Hence UAPA is designed as an unjust, strange and peculiar act.
Many Muslims, tribals, Dalits, Intellectuals, Political Activist, Trade Unionist, Lawyers, Social Activists not in the good books of the government are falsely implicated, imprisoned and tortured by denial of bail for longer periods all in the name of controlling terrorism and by framing them under the UAPA Act.

Ironically the premier investigating agency of the nation NIA constituted to investigate high profile terror cases has degraded itself to investigate inter religious and inter caste marriages, Cow theft cases and cases involving octogenarian priests. Prominent Human Rights activist of the country have become the most favourable targets of NIA under the BJP regime. In the initial six years from its establishment NIA had investigated only 16 cases per year after Modi Government came to power the cases investigated by NIA has risen to 373 per year. Many small cases required to be investigated by the State police are being taken over by NIA to satisfy Sangh elements.

The amendments brought forth in the NIA Act in 2019 by Modi Government has drastically snatched the federal rights of the State Government in administering the Police Department.

Our constitution guarantees a secular Democratic nation wherein the citizens are guaranteed the right to form associations to spread their ideals and serve people. To trample these Secular and Democratic ideals of the constitution NIA raids and bans the organisations working for Tribals, Muslims and Dalits using the UAPA Act.

The Governor of Tamil Nadu R. N. Ravi is trying to harm the Socially Just Dravidian Model Administration promoted by a constitutionally elected DMK Government by promoting a parallel Aryan Model Administration. Several Legislations passed by the state legislature have not received his assent for a very long time. He acts as barrier for the release of prisoners who have completed more than two decades of imprisonment.

Men and women took part in large numbers in this massive peoples protest programme to fight Injustice and oppression.