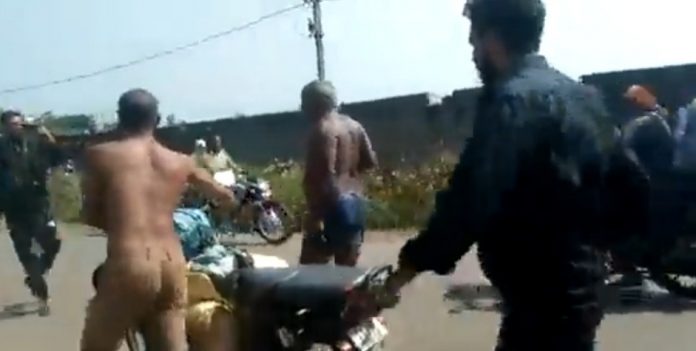 Two men in the Bilaspur district of Chhattisgarh were stripped, paraded half-nkaed for “selling beef”. The men have been identified as Ramniwasi Meher (52), a resident of Mudhipar, and Narasimha Rohidas (50), a resident of Rahangi.

In a video that’s viral on social media, two men are shown getting beaten by a man with a belt while wearing only their underwear.

#Chhattisgarh, two Dalits were undressed, paraded, and thrashed by mob on suspicion of selling #beef. pic.twitter.com/JTe3d32xLc

As others record the incident on their phones and other shouts encourage him, a man in the crowd whips one of the accused.

The two accused have been detained, and according to the police, more than 33 kg of beef was found on them.

In a statement, police said “one Sumit Nayak registered a complaint yesterday, alleging that Narsingh Das (50) and Ramnivas Mehar (52) were riding a two-wheeler loaded with a white sack. When the complainant and others asked them what is in the sack, they replied that it had beef, the complaint says. Senior police officers were then informed, and the two men were taking into custody”.