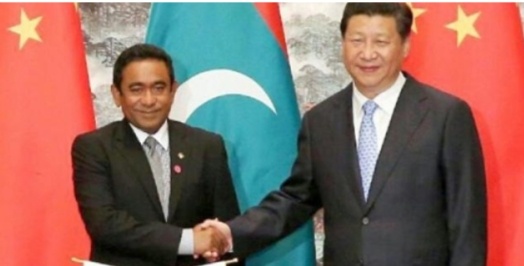 There is hardly any region around India where China has not been trying to meddle with India. Whether it be Nepal, Srilanka, Bhutan and now even in context to the latest overture by India  in Maldives. The news through NDTV on September 20, 2020 1  has informed ‘India Gives $250 Million Soft Loan To Coronavirus-Hit Maldives,  The grant, provided under the most favourable terms possible, was in response to the request made by President Ibrahim Mohamed Solih to Prime Minister Narendra Modi to overcome the difficult economic situation in the Maldives’. The support which India has given was termed as ‘resilience and reliability of the India-Maldives relationship. India’s Neighbourhood First policy and the Maldives’ India First policy’. PM Modi first overseas visit was to Maldives after his second term in office, informed TheArabNews on June 8, 2020 2

But, even this step of India seem to have upset China, which gives an idea as to how China has put everything under extreme-scrutiny on the Indian front, and accordingly it has reflected through its state affiliated newspaper The Global Times on September 20, 2020 3 , perhaps, becomes understandable as China is  head-to-head involved in border disputes with India in Ladakh, Arunachal Pradesh, Himachal Pradesh and Uttrakhand. The article titled as ‘Why Maldives security deal stirs India’s senses’ has tried to establish a point that some ‘officious’ Indian media outlets have tried to sell the story that there is a link between Maldives cooperation with US and cooperation with China and that China had been trying to exploit the resource-rich Indo-Pacific region and that now US wants to propel India to throw a challenge to China’. It may be known here that since 2018, when Maldives president Solih has assumed to power, PM Modi has given 1.4 billion USD aid to Maldives ‘amid worry over it China debt’ informed Reuters on December 17, 2018 4 .  But, the real concern for India is the presence of China military base in Maldives famously known as ‘strings of pearls’ informed DefenceNews.in on May 16, 2020 5 and it is here where India wants to meet to the challenge even in a tiny island.

This China’s posture, through the article, has come along with display of its Z-10A Helicopters live-drills on d-atis on September 22, 2020 6 in north Aksai Chin through which China has intended to give a joint-message to both India and US as it has been in conflict with both the countries. India and US have in the recent days shown affinity for Taiwan which China considers to be its part and there have been ‘sparks flying’ between US and China over it.  But, the article shows, that China is in acknowledgment to the Indian engagement in Maldives and India might have misjudged the position as  ‘the Indian outlets implied that the recent US-Maldives deal is targeted at China. The defense and security pact between the US and the Maldives was reached on the backdrop of growing transnational threats such as piracy, violent extremism, terrorism, and illicit trafficking, (had) said the Maldivian Ministry of Defence.
Judging from the content of the deal and the remarks made by the two countries’ officials, this should be a normal cooperation. As long as it contributes to maintaining peace, security and prosperity in the region, all countries in the region and the world should respect and welcome it.
If there is really a target of the deal, it should be India rather than China. As the most powerful country in the Indian Ocean, India has always regarded the region as its own sphere of influence and it remains highly vigilant against the presence of countries from outside of the region.
In the Maldives, India’s influence has always been the dominant one. The national security of the Maldives is largely guaranteed by India. China has engaged in extensive mutually beneficial cooperation with the Maldives. However, China has never been exclusive toward Maldives’ relations with other countries. The defense cooperation deal between the Maldives and the US has de facto broken India’s monopoly in this area. If India is not worried, what shall China worry about?’ Is the question China has posited to India. But, perhaps, India is too much involved with US to keep into context in its long-term-interests.

China’s interest in Maldives obviously starts with the reason that ‘the vast majority of China’s trade with the Middle East, Africa and Europe passes through the Indian Ocean, while China has been expanding cooperation with regional countries. Given that there are various unsafe factors in the Indian Ocean such as piracy and natural disasters, maintaining the freedom of navigation and maritime safety in the region is of vital significance to China. This is also a common concern of countries bordering the Indian Ocean, as well as other relevant nations.  China has no territorial or maritime disputes with any country at the Indian Ocean. Instead, China has sent the PLA Navy to the Gulf of Aden for convoy missions and set up a support base in Djibouti. In addition to safeguarding the freedom of navigation and safety of Chinese vessels, China also assures security for the international community’. But, ‘India, the most powerful country at the Indian Ocean, regards China’s existence as a threat’. Whereas, ‘in the past, India saw the US presence in the Indian Ocean region as a threat. Now, as India strategically regards China as its greatest threat, it has turned to tolerate the US presence in the region. It has even joined hands with the US to neutralize China by actively catering to the US’ Indo-Pacific Strategy’.

If the official media of China is to be analysed in the past few months, this article comes as a surprise and it has been very low on rhetoric and tries gives a message of  ‘live and let live’ and calls India a great-power a few times as ‘countries at the Indian Ocean hope to cooperate with all nations of the world. They are unwilling to see the Indian Ocean ruled by one or two great powers. In the 21st century, countries should adhere to free, equal and mutually beneficial cooperation. Great powers should no longer engage in setting their spheres of influence. China does not oppose any friendly country’s cooperation with India’.  Going by the tone of the article is shows that China does not want to enter-with-India into any race in Maldives.

But, as the going-has-got-so-hard between India and China, and a ‘hot-winter’ might be waiting for the two, coupled with US boisterous presence in South China Sea, the tide does not seem to draw back.

The writer is a former UP State Information Commissioner. He writes on international politics and is a media analyst.