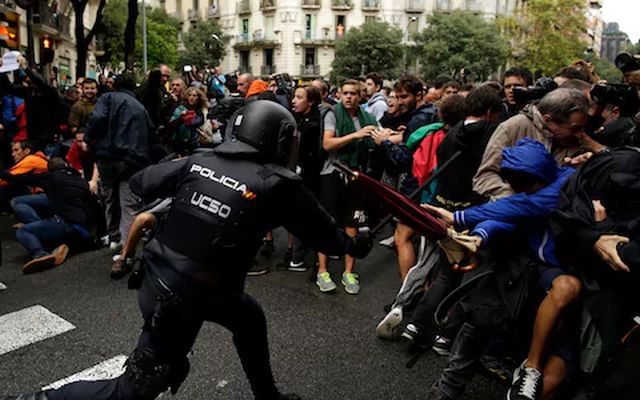 Barcelona : Protesters in Catalonia region clashed with the police after Spain’s Supreme Court ruled that 25 separatist leaders should be tried for rebellion, embezzlement or disobeying the state, the media reported on Saturday.

According to the ruling on Friday, convictions could result in up to 30 years in prison, the BBC reported.

One of those taken into custody was Jordi Turull who was to be the subject of a vote in the Catalan parliament on Saturday for regional president.

More than 20 people were injured as the police used riot batons to keep protesters away from federal buildings in Barcelona on Friday night.

Demonstrations also took place in other parts of Catalonia.

Friday night’s rallies had been organised by a separatist group before the court decisions were announced, reports the BBC.

But the rulings appeared to inflame the protesters and angry crowds confronted lines of riot police protecting Spanish government buildings in Barcelona.

Tensions spilled over into violence as some protesters tried to break through police lines.

Friday’s rulings were considered the most serious challenge to date for the Catalan independence movement. Almost the entire leadership now faces a major legal fight.