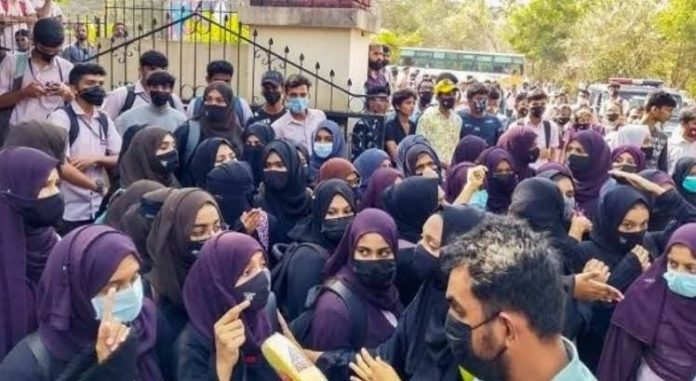 Bengaluru:  Amid the prevailing tension in connection with the hijab row and the case being heard in the high court, schools reopened on Monday for students of Class 9 and 10 across Karnataka.

In most of the schools, the Muslim students attended classes without hijab and a few institutes allowed them to attend classes wearing hijab. Police personnel have been deputed near all schools and authorities have made proper security arrangements near the premises of schools located in sensitive locations.

Home Minister Araga Jnanendra stated Monday morning that parents need not worry about their wards as all necessary steps have been taken by the education as well as the home department to maintain law and order situation. Peace meetings have been conducted by the school authorities, education department officials, district authorities as well as parents for peaceful conduct of classes without confusion. “Peace meetings have to be conducted in all places, at all schools,” the Home Minister stated.

Meanwhile, Bengaluru Urban District Commissioner J. Manjunath has given orders to the authorities to check and ensure measures taken to maintain law and order situation in and around schools. Assistant Commissioner Shivanna stated that he was visiting schools as per the directions of the DC to inspect schools. “So far the situation is normal and classes are being held normally all over the city,” he stated.

The school management asked students to take off their burka and hijab before entering school premises in the Nizamia school of Mysuru. The students took off their burka and hijab and went to classes in uniform. Though the students of the Government Urdu School of Jewargi in Kalaburagi district attended classes wearing hijab, the teachers informed students about the court order and asked them to remove the hijab.

Meanwhile, the Karnataka High Court will resume hearing on petitions seeking permission to wear hijab to classes Monday noon. In its interim order, the three bench judge has restrained students from wearing hijab as well as saffron shawls and any religious symbols. The court also directed the government to reopen schools and colleges.

The state government is expected to take a call on reopening pre-university and university colleges Monday evening. Education Minister B.C. Nagesh has said that schools were running peacefully across the state.– IANS