Coimbatore, Fed 21 : Taking a cue from Delhi’s Shaheen Bagh where protestors are staging in sit-in agitation against CCA for the past couple of months, Muslim families commenced a similar sit-in at Aathupalam junction connecting Palakkad road and Sundarapuram road in Coimbatore city. The protestors, who took part in large numbers at the district collectorate besieging event started the sit-in agitation from Wednesday night. 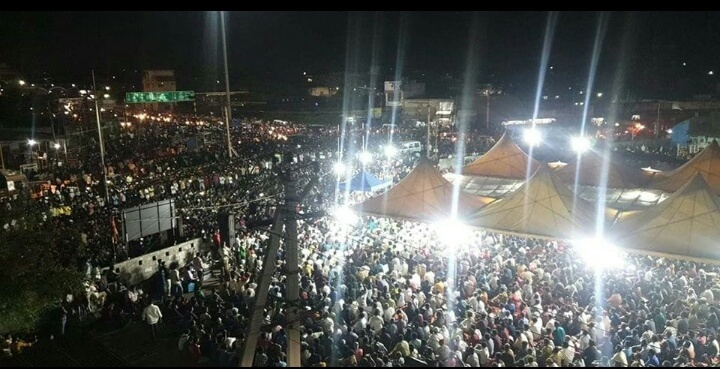 As a sequel to this, the main thoroughfare witnessed traffic blockade with thousands of Muslims from across the city converging at the Aathupalam venue. Purdah clad women spent the night alongwith their men counterpart at the sit-in agitation. Strong police pickets have been posted in and around Ukkadam and Aathupalam area following the sit-in agitation against CAA, NRC and NPR.

According to organisors, the sit-in agitation will continue till the central government withdraws the CAA, NRC and NPR. For the second day today (Thursday), women-folk were asked to sit-in at the agitation site only during daytime. However, their men counterpart continued with their agitation round the clock. Police personnel have been deployed near the agitation site even when the city police chief is monitoring the happenings.

To the protesters surprise, a youngster named Abdul Kalam got in wedlock with Reshma at the agitation venue. The newly-wed squatted along with the protesters and shouted slogans against CAA, NRC and NPR. Its heartening to witness both young and the old even tiny-tots enthusiastically participating at the sit-in agitation braving all odds.  Sources from Jamaat-e-Islami Hind (JIH) and all jamaths besides Muslim outfits said that they have resolved to continue with the sit-in agitation till the demand is met. Meanwhile, spiritual leaders and jamath heads continue to visit the agitation venue and addressing the protesters with words of encouragement.