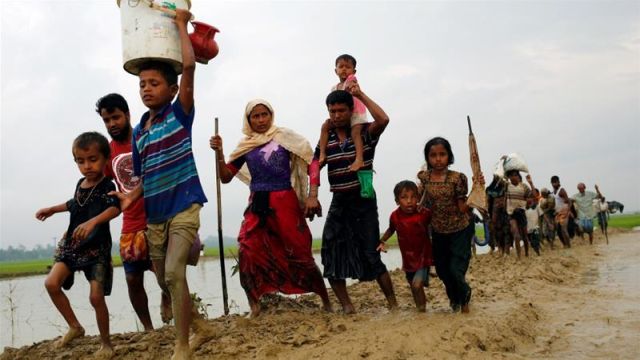 A group of human rights activists in Canada, led by Fareed Khan, have decided to declare August 25 as the Rohingya Genocide Day. The Rohingya are a Muslim minority in Myanmar who have been victims of genocide committed by a group of fanatic Buddhists under the nose of the army and police and Aung San Suu Kyi, the Nobel Peace Prize Laureate. As a result of the atrocious acts committed against them, the Rohingya have been described as the most oppressed minority in the world by the United Nations Human Rights Council.

Fareed Khan and his friends, all of whom are human rights activists, decided to make August 25 a day to mark the genocide crimes committed against the Muslim Rohingya. Tens of thousands signed a petition that was submitted to the Canadian prime minister, calling upon him to strip Aung San Suu Kyi of the honorary Canadian nationality that was given to her when she was fighting the military rule in Myanmar that ruled the country with so much cruelty. Many Rohingya Muslims were persecuted, killed and became homeless while hundreds of thousands fled to nearby countries, mainly Bangladesh.

The whole world sympathized with Suu Kyi who was placed under house arrest by the military. International pressure on Myanmar’s military rulers finally forced them to free her and to hold general elections although the military retained some ministries and a quarter the seats in Parliament.

In the elections Suu Kyi’s party won by a landslide. However, even before she took over the country, she refused to condemn the atrocious acts against the Rohingya Muslims although many international figures such as the Dalai Lama, leader of the Buddhists in Tibet, the Pope and Desmond Tutu called upon her to condemn these acts. Tutu, the South African Anglican cleric who also won the Nobel Peace Prize, sent her a message demanding that the Rohingya should be given their rights and all oppressive acts against them should be stopped.

Suu Kyi ignored all these calls and claimed that the situation was tense and difficult. Everyone thought that she would take measures to protect the historical, national and humanitarian rights of the Rohingya minority but she did not.

The UN Human Rights Council and other human rights organizations have issued reports about the genocide committed against the Rohingya, which includes rape, expulsion and burning down entire villages and the demolition of houses and even mosques. The honorary Canadian citizenship of Aung San Suu Kyi should be revoked because she is indirectly involved in the mass genocide crimes against the Rohingya.

Justin Trudeau, the Canadian Prime Minister, is known for his sympathy toward just causes and his strong relationship with Muslims in Canada. He respects the month of fasting and recognizes the benefits of fasting for health. He would not sanction or stay silent about the genocide taking place in Myanmar.

There is no shred of logic in honoring a women who is racist and who has continually turned a blind eye to crimes committed against humanity. The UN realizes the suffering of the Rohingya but has not taken any action to stop the crimes committed by extremist Buddhists. Hundreds of thousands have fled to Bangladesh in search of security.

The Rohingya might feel safe in Bangladesh but they do not have the means to live there. Bangladesh cannot accommodate such a large number of refugees, which continues to increase. The Myanmar government has called upon the refugees to return but they are afraid that they may be killed because they do not trust the government. They refuse to return unless there are UN guarantees and other guarantees from the Organization of Islamic Cooperation and other similar organizations. These refugees should be able to return to their villages not to camps as the racist government of Myanmar has suggested.

(Dr. Ali Al-Ghamdi is a former Saudi diplomat who specializes in Southeast Asian affairs. He can be reached at algham@hotmail.com)