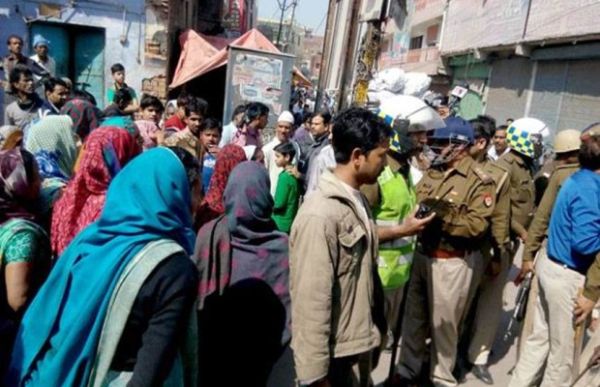 Agra, Feb 29 : Four days after a VHP leader was murdered in Agra, the city was on Monday gripped by communal tension.

The situation is tense and ahead of the 13th day death ritual of the deceased leader, the build up may snowball into a major confrontation with the state government, sources told IANS.

“This tragedy has brought all ranks of the Hindutva organisations together and could be taken as a pointer to the 2017 assembly polls,” they said.

Heavy presence of security forces in the Nai ki Mandi and Mantola police station areas, the deployment of the Rapid Action Force and 24-hour vigil by senior officials have helped contain the build up so far.

But speeches at a condolence meet on Sunday evening by Bharatiya Janata Party leaders including HRD minister of state Ram Shankar Katheria, local legislators and Vishwa Hindu Parishad (VHP) leader Sadhvi Prachi who reached the venue in disguise have only heightened tension in the city.

Arun Mahaur, a VHP vice president, was shot dead on Thursday in a busy market while returning from a temple.

The incident has led to BJP leaders along with other Hindutva groups converging on the city.

“When the authorities did not allow us to hold a meeting at the deceased leader’s residence, the venue was shifted to Jaipur House colony Ram Lila ground where thousands gathered,” Bajrang Dal leader Premendra Jain told IANS.

VHP leader Sadhvi Prachi said conditions in the state were as bad as in Kashmir and the Akhilesh Yadav-led state government was indulging in minority appeasement.