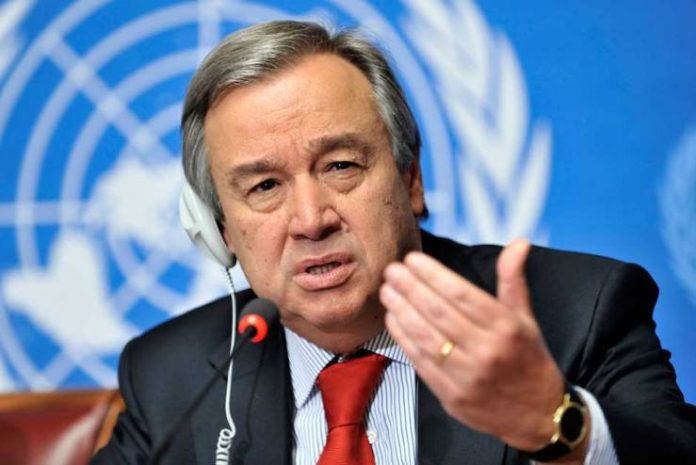 New Delhi: UN Secretary-General Antonio Guterres on Tuesday, said that he is concerned by grave violations in Jammu and Kashmir. He asked the Indian government to end the use of shotgun pellets against children.

“I call upon the government to take preventive measures to protect children, including by ending the use of pellets against children, ensuring that children are not associated in any way to security forces, and endorsing the Safe Schools Declaration and the Vancouver Principles,” he said in the UN Report on Children 2021.
The report said that four children were detained by Indian forces in Jammu and Kashmir for alleged association with armed groups.

“A total of 39 children (33 boys, 6 girls) were killed (9) and maimed (30) by pellet guns (11) and torture (2) by unidentified perpetrators (13) (including resulting from explosive remnants of war (7), crossfire between unidentified armed groups and Indian security forces (3), crossfire between unidentified armed groups, and grenade attacks (3)), Indian security forces (13), and crossfire and shelling across the line of control (13). The United Nations verified the use of seven schools by Indian security forces for four months. Schools were vacated by the end of 2020,” the report said.
“I am alarmed at the detention and torture of children and concerned by the military use of schools,” the UN chief noted.

The UN Secretary-General praised the government’s willingness to work with his special envoy to implement national preventive and accountability measures for all severe violations.

“I urge the (Indian) Government to ensure that children are detained as a measure of last resort and for the shortest appropriate period of time, and to prevent all forms of ill-treatment in detention,” he said. “I also urge the (Indian) Government to ensure the implementation of the Juvenile Justice (Care and Protection of Children) Act, 2015, to address the use of children for illegal activities and the situation of detained children.