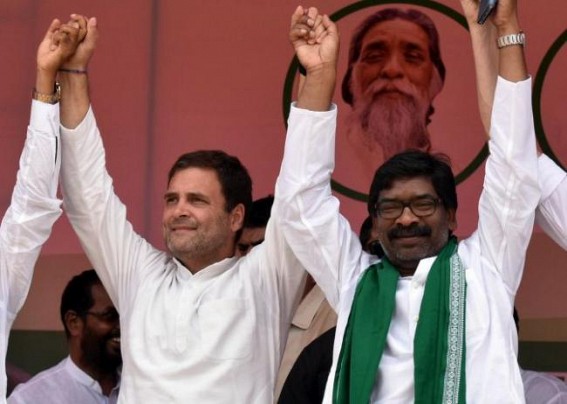 New Delhi, Dec 23 Jharkhand is set to give a jolt to the ruling BJP with the Jharkhand Mukti Morcha-Congress alliance establishing leads in 42 assembly seats, the magical mark to form the government.

While the JMM-Congress-RJD has a clear lead over the BJP which is leading in 29 seats, Chief Minister Raghubar is also trailing from his constituency – Jamshedpur East by over a thousand votes.

The pre-poll alliance of JMM-Congress-RJD is at the halfway mark of 42 seats in the 81-member Jharkhand Assembly, as per results shown by Election Commission.

The JMM led by Hemant Soren is leading in 24 seats, Congress in 13 and RJD in 5 seats. Hemant Soren is tipped to be the Chief Minister on the alliance winning the polls. There have been celebrations at Congress headquarters here as functionaries distributed sweets.

Jharkhand Chief Minister Raghuwar Das, earlier on Monday, asserted that the BJP will come back to power in the state and said that it was too early to react on the early trends.

Speaking to reporters here, Das said, “I”m sure that we are winning and the government will be formed under the leadership of BJP.”

With the BJP on the back foot, the Congress is asserting that the win in Jharkhand is a rejection of BJP”s national narrative of CAA, Article 370.

Congress Secretary Pranav Jha said, “The people have rejected the national narrative built by the BJP in the state over the issues of Article 370, Citizenship Amendment Act and the National Register of Citizens (NRC) and voted for the local issues.”

He said, the people of the state voted for the local issues, over the inflation and the employment for youths.

Not wanting to take any chances and further consolidation moves to unseat the BJP, the Congress has spoken to former ally Babulal Marandi whose party JVM is leading on at least 4 seats.

Sources told that JVM has not given any assurance to the Congress leaders so far, but have said that the party will hold talks only after the final results are out.

In the battle for the key seats in Jharkhand, Chief Minister Raghubar Das is facing a tough fight with his former estranged colleague and independent candidate, Saryu Roy from Jamshedpur East. Das is trailing by over a thousand votes over Saryu Roy.

Former Chief Minister and Jharkhand Vikas Morcha (Prajatantrik) (JVM-P) chief Babulal Marandi on Monday said that “no one is untouchable in politics” and the BJP and the Congress were in touch with him.

Speaking to the media here, Marandi said, “In politics no one is untouchable. We are in touch with the BJP and the Congress.”