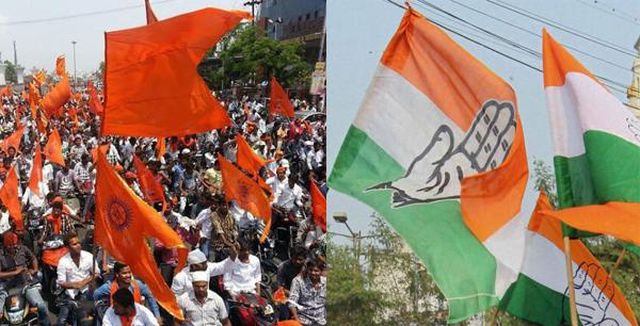 New Delhi : A day after Rahul Gandhi posted a video highlighting the BJP and RSS leaders’ “anti-Dalit” stance, the Rashtriya Swayamsevak Sangh on Monday hit back terming the Congress chief and his party’s campaign a “political swindle based on lies”.

“The Congress party and its President continue to try and misguide the society with their lies and deceit.

“The official Facebook page of Rahul Gandhi has shared a blatant lie in the name of Sarsanghchalak Mohanji Bhagwat and me. In that he has claimed that the RSS intends to end the reservations granted to the SC/ST communities by the Indian constitution,” RSS joint general secretary Manmohan Vaidya said in a statement.

Vaidya said “these allegations are a white lie and absolutely baseless”.

Gandhi on Sunday targeted the Bharatiya Janata Party and RSS for posing “fascist ideology”, and claimed that they wanted Dalits and Adivasis to exist on the bottom rung of the society.

Gandhi shared a two-minute-long video on Twitter showing atrocities against Dalits, including the 2016 Una incident.

He also questioned the “silence” of Prime Minister Narendra Modi on the rising incidents of atrocities against Dalits in the country.

“Central to the RSS/BJP fascist ideology is that Dalits and Adivasis must continue to exist at the bottom rung of society. In this disturbing video, the dangers of this mindset and how it’s openly propagated by senior RSS/BJP leaders is revealed,” Gandhi tweeted with the hashtag #AnswerMaadiModi or “Modi must answer” in Kannada.

The RSS member later challenged Gandhi, saying “if he has some honesty”, he must furnish proofs.

Vaidya said the constitutional provisions of reservations for the Scheduled Castes and Scheduled Tribes are because of the social inequalities that unfortunately exist in the Hindu society.

“It has been the official stand of RSS that these reservations should continue.”

He said the Akhil Bharatiya Pratinidhi Sabha has reiterated this from time to time through its resolutions.

The RSS is committed and engaged in creating an egalitarian and harmonious society in the country that is free from social inequalities, Vaidya said.

“Rahul Gandhi and Congress Party’s campaign is a political swindle based on lies and falsehood. I strongly condemn this heinous and unwelcome conduct,” Vaidya added.