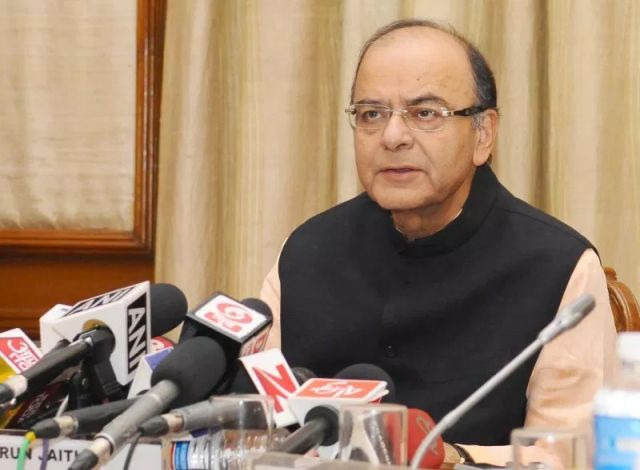 New Delhi : Finance Minister Arun Jaitley on Tuesday said that the Congress has scored a self-goal by dragging Prime Minister Narendra Modi’s parents into the election campaign. The BJP will be glad to fight the 2019 Lok Sabha elections if the Congress made it a contest between the “son of lesser known parents” and “someone who is known only for parentage rather than merit and competence,” he said.

In an article `What was the name of Sardar Patel’s Father’ on BJP’s website, he targeted Congress President Rahul Gandhi and said the weakness of dynastic parties is that their strength is co-existent with the strength of the present generation of the dynasty.

He sought to tear into the Congress by referring to the remarks of party leader Raj Babbar, who had talked of age of Modi’s mother in connection with the falling value of rupee, and to comments of another leader Vilas Muttemwar, who had said that nobody knew the name of Modi’s father.

“The debate whether India should be a dynastic democracy has been ignited by a self-goal of the Congress Party. The Prime Minister’s mother’s age was made a subject matter of the electoral debate. His father’s anonymity was commented upon as an inadequate credential of the Prime Minister. The argument given was that if you represent the legacy of a well-known family, it is a political point in your favour,” Jaitley said.

The BJP leader said Congress considers only a great surname as a political brand. “Millions of talented political workers who come from modest family backgrounds would fail by the Congress test of leadership. Merit, talent, ability to inspire and lead would not be a virtue.”

Jaitley said he asked his well-informed friends if they knew the name of Mahatma Gandhi’s father or Sardar Patel’s father or wife but none of them had a definitive answer.

Referring to contributions of Gandhi and Patel, he said no photograph of Patel’s wife or her details are available even after extensive research by modern day historians.

Jaitley said that after Sardar Patel’s death in Mumbai, the then Prime Minister Jawaharlal Nehru requested many of his cabinet colleagues that the best tribute to the Sardar would be to work on the day of his funeral and not go to Mumbai but the then Head of State and several union ministers defied the advice.

“The proposal for building his statue at Vijay Chowk was rejected. The country had to be satisfied with the installation of his statue at a traffic round-about on Parliament Street,” he said.

The BJP leader said many believe Sardar Patel was a farmer leader because of his participation in Bardoli Satyagraha but he was one of Ahmedabad’s most successful practising barristers.

“Panditji is passed off as a great lawyer though he never argued a single case in his entire career. He only went to court once for reasons of tokenism to sit behind senior lawyers led by Bholabhai Desai, who was arguing for the three INA officers in the mutiny trial inside the Red Fort,” Jaitley said.

The BJP leader said that dangers of officially glamourising one family at the cost of those who made a far greater contribution is dangerous both for the nation as also for the party to which they belong.

“The contribution of other great stalwarts like Patel and Subhash Chandra Bose is downplayed. Members of one family are projected as larger than life. The party adopts them as its ideology.”

He alleged that Nehru promoted Indira Gandhi as his successor and laid the foundation of India as a dynastic democracy.

He said when Sikhs were massacred in 1984, “communal polarisation against them was considered a legitimate electoral strategy.”

“Today anti-BJPism leads the Congress to a situation where it can tie up even with its political rivals and sympathise with the Maoists, separatists and disruptionists.”

He said the real strength of Indian democracy would be when the charismas of some families is completely shattered and parties, through a democratic process, throw up leaders of merit and competence.

“This was more than adequately proved in 2014 where most dynastic parties lost miserably. India of 2019 is different from India of 1971. If the Congress Party wants the 2019 elections to be between Prime Minister Modi, who is the son of lesser known parents and someone who is known only for his parentage rather than capacity, merit and competence, the BJP would gladly accept the challenge. Let this be the agenda for 2019.”

Modi had also targeted the Congress over its leaders referring to his parents during elections and said in one of his rallies that his father had passed away 30 years ago.