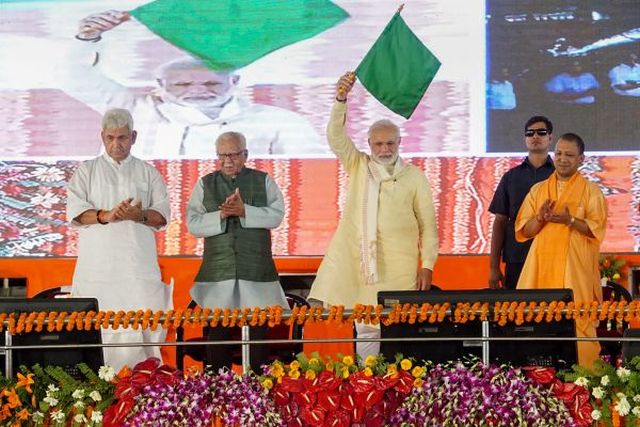 Azamgarh (Uttar Pradesh) : Raking up the controversy over the reported remarks of Rahul Gandhi that the Congress is a party for Muslims, Prime Minister Narendra Modi on Saturday accused the Congress and other parties of wanting continuance of practices like triple talaq.

He also wondered whether the Congress was interested only in the welfare of Muslim men and not women.

“For the last two days I am hearing that a naamdar leader (a sarcastic reference to Rahul Gandhi) recently said that the Congress is a party of Muslims. I’m not surprised. Even former Prime Minister Manmohan Singh once said that Muslims have the first right over nation’s natural resources.

“But I want to ask the naamdar of Congress, congratulations to them. But please tell us whether the Congress is only for Muslim men? Or does it have space for Muslim women too because they don’t stand with Muslim women on issues of triple talaq and nikah halala,” he said addressing a public meeting after inaugurating the Purvanchal Expressway in a speech aimed at the next Lok Sabha polls in the battle ground state.

Modi said all the parties have been exposed on the issue of triple talaq. It concerns the lives of lakhs and crores of Muslim women. Even in Islamic countries, there is a ban on triple talaq, he said.

The Prime Minister’s attack on Gandhi and the Congress on the issue of Muslims came a day after Defence Minister Nirmala Sitharaman accused the Congress of dividing the country on communal lines and playing a dangerous game before 2019 general elections.

Citing a report in an Urdu daily which claimed that Gandhi told a meeting of Muslim intellectuals earlier this week that the Congress is a party for Muslims, she had demanded an apology from the Congress President.

The Prime Minister also accused the opposition parties of not allowing Parliament to function. “They don’t allow the Parliament to function. They stall the proceedings. I would like all anti-Modi leaders to go and meet these women who have been affected by triple talaq and nikah halala and then come to Parliament. People have to be alert about such parties.

“These parties want triple talaq to continue. I will try to make them understand and bring them together for the sake of Muslim women so that they get freedom,” he alleged.

He said these are 18th century parties in the 21st century and cannot do any good for the country.

Modi said that Purvanchal Expressway will take Uttar Pradesh to greater heights. “More than Rs 23,000 crore will be spent on the project. All cities, towns between Lucknow and Ghazipur, that fall on this route will witness a change.”

“The Yogi Adityanath government has been able to control crime rate, corruption in Uttar Pradesh. He has contributed immensely in the state’s development,” Modi said.

He also said besides highways, work was also on relating to waterways and airways.