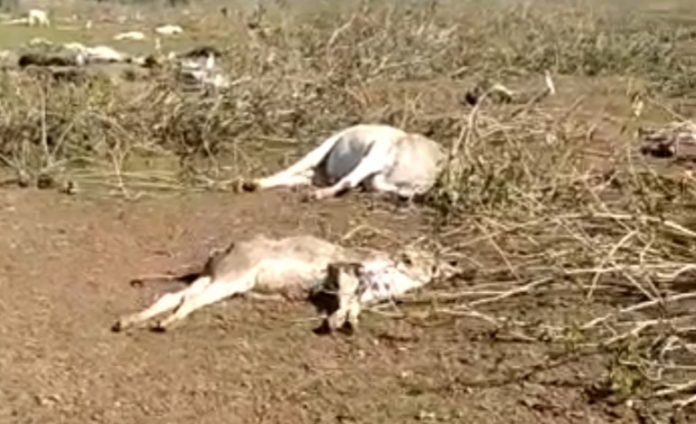 Bhopal:  After a large number of cows were found dead at a gaushala run by a local BJP worker in Bhopal, the opposition Congress has decided to take up the issue to corner Shivraj Singh Chouhan government. The Congress, which has started its campaign – ‘ghar chalo, ghar ghar chalo’, has decided to highlight the issue of cows during its campaign.

Senior Congress leader Jitu Patwari addressing a press conference at party office at Bhopal on Wednesday, accused the BJP of doing politics over cows. “BJP always claimed to be cow protector but in the last five years, 5,577 cows were killed in Madhya Pradesh. These numbers are from government’s record,” Patwari said.

Meanwhile, the Congress has formed a committee under former minister P.C. Sharma to prepare a report on killing of cows in the state. The committee has been tasked to collect reports on reasons that are resulting in death of cows. The committee will also find the amount allocated to different cowsheds from the government.

On Sunday, several cows were found dead at a private gaushala located around 40 km from Bhopal. Along with dead cows, a large number of skeletons of cows were also found at a place adjoining the gaushala.

The Bhopal district administration has booked a BJP worker – Nirmala Devi Shandilya, the proprietor of the cowshed in Bairasia.

Shandilya had been running a cow shelter in Bairasia for the past 30 years. The matter came to light on Sunday after some villagers shot videos of the carcasses that were left abandoned in a dry well near the cowshed and posted them on the social media. Later, a team led by district collector Avinash Lavaniya visited the shelter.– IANS