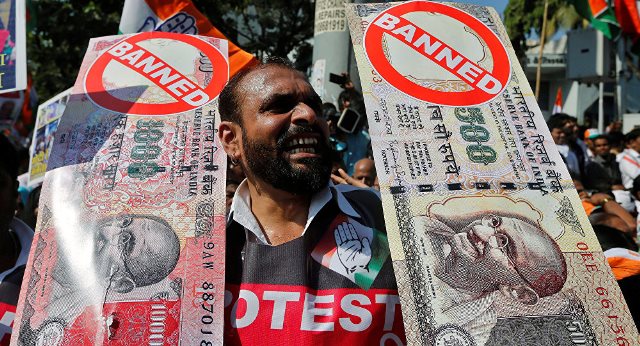 New Delhi:   While announcing nationwide stir against demonetization, the main opposition Congress party today made blistering attack Prime Minster Narendra Modi saying the demonetization has actually given birth to a new market of black-money and the people of the country have been subjected to a mockery of governance in every way. It also unveiled a booklet titled as “Demonetisation- 8/11: Attack on India’s Economy”.

Addressing a press conference here, AICC Spokesperson, Prof Rajiv Gowda and party In-charge Communication Randeep Singh Surjewala said the nationwide movement will expose the biggest scam of independent India which is ‘Demonetization. They alleged that 50 days after the ‘Modi made a disaster of Demonetization’, has run its course and nothing is changing for the better and adding that the Congress workers will hold District level ‘gherao’ of Collectorate across India.

On the occasion, they also launched the 16-page Booklet which provides a detailed analysis of everything that has gone wrong with the demonetization and will continue to go wrong as the next year unfolds. This Book will provide the ammunition that will enable people to know and talk to others and expose the demonetization for the fraud that has been played on the people of India.

Surjewala said the demonetization has actually given birth to a new market of black-money. “It has ended up creating two more markets of black-money – one market to convert old notes into new notes at commission ranging from 20 to30% which is happening with tacit complicity and sometimes with the active complicity of the Government and its officials as various raids have exposed, he added.

Alleging that BJP leaders and ministers have prior information about demonetization, Surjewala said BJP president Amit Shah’s bank received hundreds of crores as soon as the demonetization was announced.,

“Then we look at as to how demonetization is actually a huge scam because of the exposes that have come out and demonstrated that BJP Leaders had inside information. You saw them depositing cash ahead of time, you saw them purchasing properties ahead of time, you saw Mr. Amit Shah’s bank receiving hundreds of crores as soon as the demonetization was announced, you have seen other BJP Ministers in Maharashtra and elsewhere , their banks, their cars all being full with huge amount of cash, as the news unfolded”.

Senior party leader and MP Prof. Gowda said the people of the country have been subjected to a mockery of governance in every way as we have seen rules and counter-rules and about what we have endured as a Nation, think about the opposite situation.

“What the Prime Minister unleashed on 8th Novemberwas the exact opposite of this economic logic. He took away the resources that were in the hands of the people of India and induced recession or disaster for a growing economy. This disaster was ill-conceived and as the implementation unfolded, reverse rules on a daily basis”.

Gowda also alleged that the PM has ruined the institution of the RBI which has been decimated in terms of responsibility, its autonomy and its authority, its role in monetary policy and cash management.

People have died in queues, and the Prime Minister and his Cabinet have been very callous not even to acknowledge the tragedy of a monumental failure in implementing an idea that was not appropriate for the economy, he added.

He alleged that the Prime Minister and the Finance Minister made false promises and the latest one is that things would be back to normal by today. Then why the amount of withdrawal has only increased from 2500 to Rs. 4,500, he asked and adding that they (PM and FM) are not able to deliver on them, they are turning citizens into beggars for their own cash that is rightly their own.

To expose this entire scam and expose as to how national income and GDP will be affected, the Congress has decided to launch a nationwide program, Gowda said.