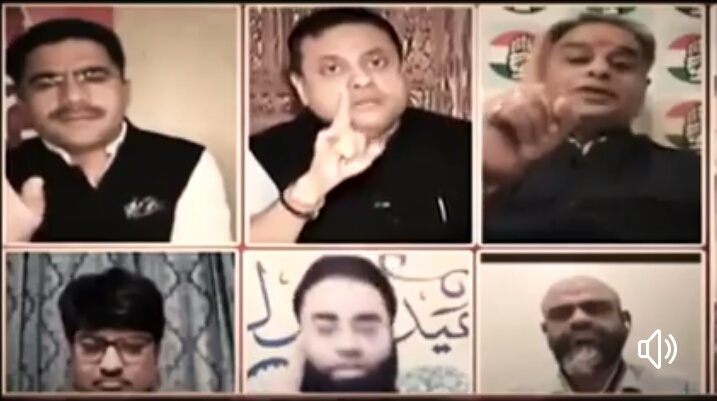 New Delhi: In the wake of death of its TV panelist Rajiv Tiyagi, main opposition Congress on Wednesday urged News Broadcasting Standards Authority (NBSA)  to issue an advisory to the media houses for enforcing a code of conduct to curb the sensationalist, slanderous, sardonic and toxic  debate on TV channels.   A party delegation met the self-regulatory authority and expressed its grave concern over the behaviour of   news channels which appeared to throw all journalistic ethics to the wind for defending the ruling party.

A  delegation  comprising Dr. Abhishek Manu Singhvi, MP Rajya Sabha,  Pranav Jha, Secretary, AICC; and  Jaiveer Shergill, Spokesperson, AICC appeared before the NBSA with the request for issuance of advisory it  to these channels and asking  to strictly  adhere the NBSA guidelines.

It is worth mentioning here that NBSA guidelines issued in December, 2012, had put an obligation on all media houses to ensure that their programmes do not become a platform to spread acrimony. However, it is unfortunate that except a few, all the channels have become an undeclared mouthpiece of the ruling party and its ideology of hate. These channels seem  to have lost their credibility in the  public as well as in opposition parties  as they are  derogatorily  dubbed “ godi media” or  “lapdog media”.

In this connection ,Dr Singhvi specifically argued that  the media houses, journalists, anchors and spokespersons must be held accountable for their actions and conduct.

The News Broadcaster’s Association holds the authority to ensure compliance with its guidelines and instructions.

The NBA guidelines on broadcast of potentially defamatory content, dated 13th December 2012, have been stated to prevent the inculpable harm on an individual given the phenomenal power and reach of broadcasting.

He underlined that the TRP paradigm drives the sensational, slanderous and sardonic debate panels. As channels do not take up serious issues concerning the livelihood of people due to faulty policies of the present government.

There is an eminent need for adherence to the code of conduct & need for institutional reform in India with respect to holding of TV debates.

The delegation urged that in the current prevalent political atmosphere, the civil, respectful and factual temperament of television debate has been overpowered by on-air noise, friction and tussle. Therefore, there is an urgent need for institutional reform to tame the slanderous beast of TV debates and enforce a code of conduct.

The delegation sought two specific reliefs: As per guidelines by the National Broadcasters Association,  it asked for the Issuance of advisory for conduct as per Guideline 7.1 of the News Broadcasting Standards Regulations (See Clause B. section 3.) to comply with December 13, 2012, specifications on Broadcasting of potentially defamatory content (clause C.)

Issue a clarification on the term “Acrimonious” and instruct anchors/ panelists and media channels not to indulge in acts of personal name-calling, instigation and mic control.

Congress  delegation told that the anchor should stand responsible for the acts of their panel thereby acting as a mitigatory force rather than a catalyst to heated deliberation.  In essence, the anchor shall ensure that the decency and civility of the debate is not lost.