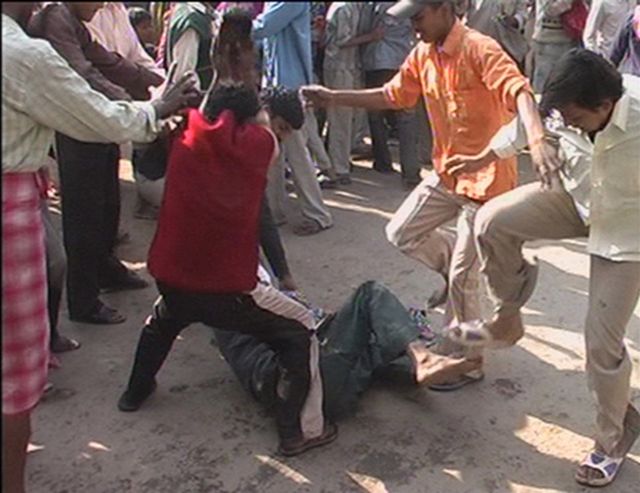 New Delhi:  Accusing the Prime Minister Narendra Modi of maintaining “criminal silence” on the growing incidents mob-lynching, the principal opposition party Congress On Monday said it would raise the mob-lynching issue in the coming monsoon session of Parliament and would press the demand for sacking the Union Minister Jayant Sinha who garlanded those convicted in the Ramgarh mob lynching incident. the Party also accused that the ruling BJP of giving ‘tacit support’ to the accused in the mob-lynching incidents.

Addressing the media here at the party headquarters,  Congress spokesperson  Pramod Tiwari said  India, under the watch of the PM  Modi, has seen more than a four and half times rise in attacks and a twofold rise in deaths due to mob lynching in 2017. He said the PM’s “criminal silence on the growing incidents is deafening”.

Is the country, under the BJP rule, turning into a mobocracy, where anarchy prevails? He asked and said ‘Maun Modi’ and ‘Kadi Ninda’ is the only defense through which the Modi government is giving itself a “clean chit”.

Congress leader also attacked the BJP saying it has been extending “tacit support” to mob-lynchers who do not fear the long-hand of law as they indulged in such activities with full impunity.

“Through this tacit support, they are abetting such hooligans to take law and order in their own hands and believe they will be protected by the government of the day.”

Referring to the garlanding of convicts by the MoS Civil Aviation,  Jayant Sinha, he said these acts are encouraging the perpetrators of the crime.

“The tacit support offered by the BJP to those accused and convicted of such crimes is more than evident when the MoS Civil Aviation, Shri Jayant Sinha garlanded those convicted in the Ramgarh mob lynching incident; MoS MSME, Shri Giriraj Singh especially paid a visit in jail to those accused of inciting communal violence and MoS Culture & Environment, Dr. Mahesh Sharma visited the accused of Dadri Mob lynching and supported the draping of the coffin of one of the accused with Tri-color.”

He also slammed BJP chief Amit Shah saying he has also refrained from taking any action on any of these ministers and BJP members, who continue to support such hooligans through statements and such acts

When asked whether the Congress Party is going to raise the issue in the coming monsoon session, Tiwari said the party will raise this issue in the Parliament. He also said Sinha should be sacked from the cabinet as he violated the oath he has taken to uphold the Constitution. We will exert pressure on the government to sack him from the cabinet during the Monsoon Session, he said. Instead of holding themselves responsible and accountable, the government has totally absolved itself through its IT Minister Ravi Shankar Prasad who conveniently blamed the social media platforms for their own misdeeds, Tiwari pointed out.

The NCRB data shows clearly that there is no correlation between the rise in reported child kidnappings and the spread of mob violence.

As the chart proves the minister’s contention wrong.