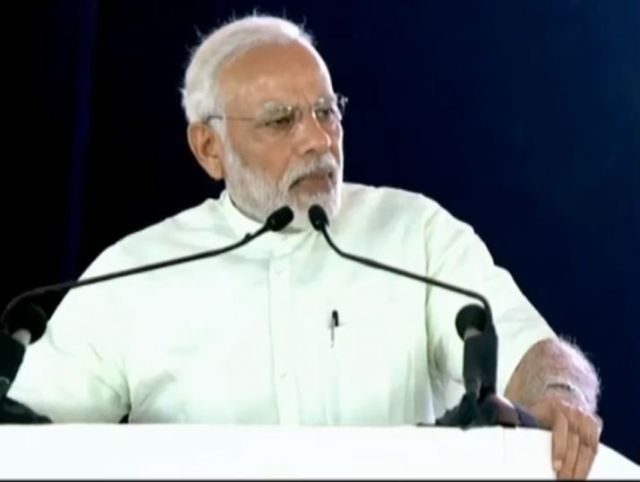 Asking the people of the country to weigh their options, he, in a reference to the Congress, said that on the other side are those for whom their family is their country, while for him, the country is his family.

Terming the opposition party anti-poor and anti-Dalit, Modi said: “Whenever we announce any programme for upliftment of the backward classes, the Congress either stalls them, or it makes fun of such programmes.”

“They find development a joke… sanitation, building toilets for women, opening bank accounts for women a joke… Only those with anti-poor mentality can find jokes in all these issues,” Modi said after inaugurating the 135-km Eastern Peripheral Expressway here.

The public rally was organised a day before the by-election in the neighbouring Kairana Lok Sabha constituency.

Accusing the Congress of lying for its political gains even in the Supreme Court, the Prime Minister said the party doesn’t realise it’s creating instability in the country.

“Now they are spreading a new lie among the farmers that if they give their land on contract farming, the government will charge them 18 per cent GST. The party which did not learn from their defeat in elections is spreading lies and misleading the farmers.”

He urged the farmers not to believe in “their lies and instead complain against those who are spreading them”. “They will face the full force of the law,” he added.

Modi said those who worship one family cannot respect democracy. “I never expected that while opposing Modi, they will start opposing the nation.”

He also accused the Congress of raising doubts when India conducted a surgical strike into Pakistan territory.

Modi said his government had done more work in the last four years than what the previous UPA governments did in ten years.

“Four years ago, we used to build 12 km of road per day, but now we are building 27 km. During four years of UPA government, they could connect only 59 panchayats with optical fibre but in the last four years, we connected over one lakh villages.

“We also promoted manufacturing in India through ‘Make in India’ programme and while before our government, only two factories manufactured mobile phones in India, now 120 factories are doing it. Many of them are in NCR (National Capital Region).”

Modi said while the opposition was indulging in populist politics, his party was doing welfare politics.

“Those with selfish motives shed crocodile tears for Dalits. They indulge in populist politics. But those who truly think of the interests of people, they do welfare politics.”

The Prime Minister said his government had not only worked towards creating opportunities for Dalits in the last four years but also to provide security and justice to them.

“We are setting up special courts for expeditious hearing of cases of atrocities against Dalits. We also decided to set up a commission to divide backward classes into sub-categories so those who are extremely backward get more benefits from reservations in government jobs and educational institutions.

“The truth is that whenever we work for poor, Dalits and backward classes, Congress and its allies either create obstacles or make fun of the initiatives,” he said.

Earlier, Modi inaugurated the Eastern Peripheral Expressway which will connect Palwal with Kundli in Haryana and reduce travel time between the two from over four hours to 72 minutes.

He also inaugurated the first nine-kilometre stretch of the Delhi-Meerut Expressway.

Modi said the two roads will significantly reduce pollution and traffic jams in Delhi as 30 per cent of the vehicles entering Delhi will be diverted.