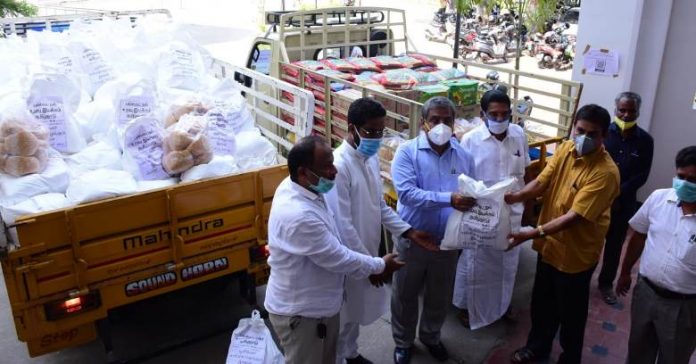 So goes the inspirational quote–No one has ever become poor from giving. True,  Haji J Mohamed Rafi, state president of All Religious Affinity Movement (ARAM) is doing yeomen services in feeding the needy right from Day 1 of nationwide lockdown. Interestingly, his entire family comprising spouse Fathima, his brothers and close friends are lending their hand in this mega exercise.

Rafi’s house at Saibaba Colony in Coimbatore is always busy as the family members are engaged in packing food which is distributed thrice a day–breakfast, lunch and dinner. And this is being done on a daily basis. It may be noted that he disposed of the jewels kept for his brother’s daughter for a noble cause. That too  during a crisis where livelihood is at stake as daily wage earners more particularly migrant workers left in the lurch sans food.

It is interesting to note that he is distributing food to around 1500 needy persons daily spending Rs 40 lakh for 53 days besides distributing grocery kits to migrant workers and people belonging to below povertyline families. ARAM coordinator M M Ramasamy, lawyer Ismail, Radhakrihnan Govind, jewellerer Babulal, Abuthahir and Bhupesh were helping him in his charity.

Notably, Rafi had donated essentials like rice, dhal, oil, flour,sugar, bath and washing soap benefiting around 500 families all worth Rs 3.50 lakh which was handed over to District Collector K Rajamani at the collectorate complex. And the district head had a word of praise on his philanthropic work that too during a crisis.Right from March 24 when Prime Minister Modi announced nation wide lockdown, this good Samaritan has been feeding the needy more particularly those languishing on roadsides bereft of any care.

This, he did, with the help of Assistant Commissioner of Police Karthikeyan and Saibaba Colony police inspector Chandralekha in feeding atleast 500 people daily and giving away grocery bag containing all essentials at locations where North Indian workers reside. The most interesting part is that his entire family including his brothers and his spouse Fathima were actively involved in this mega exercise preparing food and packing it neatly for distribution. Like-minded people also join him in the distribution of food packets and other essentials. It is pertinent to point out that the social worker had disposed off his wife’s jewels to mobilise funds for a noble cause. And he derives joy in giving to others. For him, Service to Mankind is Service to God.