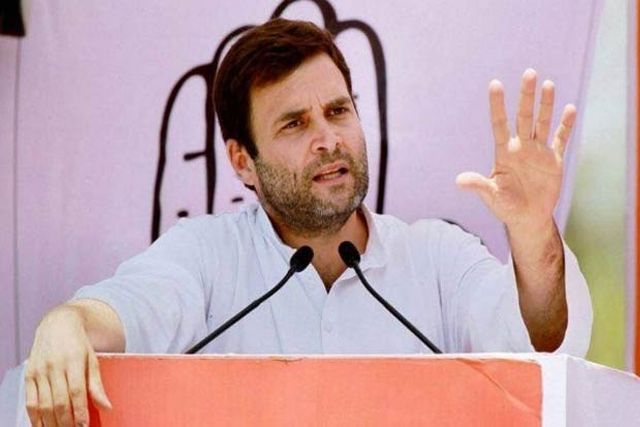 New Delhi : Congress President Rahul Gandhi on Saturday said the country, feeling tired under the Modi government, was seeking change in the 2019 general election and only his party can show the path forward.

In his presidental remarks at the party’s 84th Plenary here, Gandhi said the meeting was aimed at setting the future direction not only of the Congress but of the entire country.

Gandhi targeted Prime Minister Narendra Modi and his governmnent, which will complete four years in office in May. He said the country was looking for a change in the 2019 Lok Sabha elections.

He accused the ruling Bhartiya Janata Party (BJP) of dividing the society and said that only Congress can heal the divisions.

“Today anger is being spread in the country, the country is being divided and people are being made to fight each other. But our work is to bring people together.”

He said various sections, including youth and farmers, were feeling disenchanted under the BJP government.

“The crores of youth, who are feeling tired today, when they look towards Modi, they are unable to see a way forward.

“They do not know from where will they get employment, when will farmers get proper price for their crops. The country is in a way tired, is seeking a way out.

“And I say from my heart that only the Congress can show the path to the country,” Gandhi said to cheers from the gathering.

The Congress chief talked of the need for a balance between youth and experience in the party.

“In our tradition, there is change but we do not forget the past. There is talk of youth but I want to say from this stage that youth will take the Congress forward but cannot move ahead without the experienced leaders. My task is to connect the youth and the seniors,” he said.

Gandhi said his task was to show a new direction to the party.

“What is the difference between the Congress and our opposition. There is one big difference. They use anger. We use love, brotherhood. The country belongs to us all, is of every religion, every community and every citizen.

“And whatever the Congress does, it will do for every individual of the country and not leave any one behind,” he said.

Referring to the Congress’ symbol of hand, Gandhi said, “This is the symbol that can bring the country together, take it forward. And the power of this symbol is within you. The work of forging the unity will have to be done together by all of us and people of the country.”

The plenary, being held after eight years, has definitive stamp of Gandhi. Unlike the past, leaders are not seated on the dias. Workers and young leaders have been given more opportunity to speak on the resolutions.

The meeting is being attended by AICC members from all over the country besides office-bearers.A .

Elaborate arrangements have been made for the plenary which will conclude on Sunday.