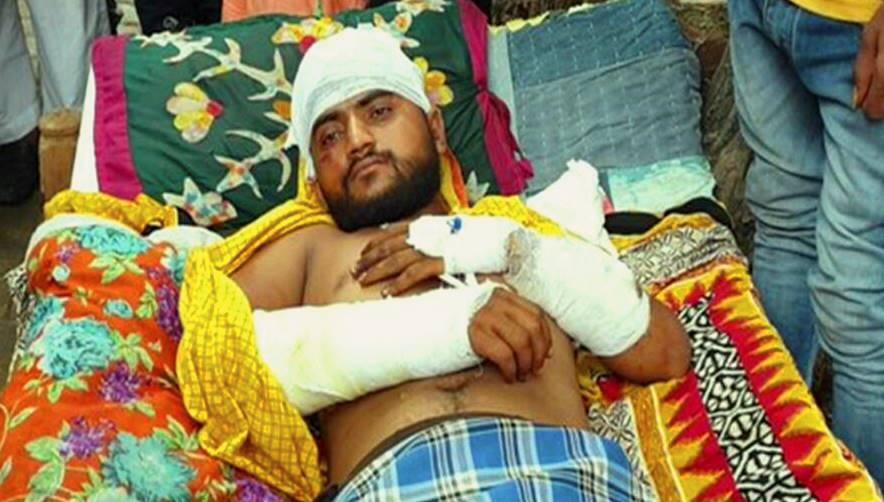 When he would become unconscious the mob would sparkle water on his face and check if he is still breathing. They would restart beating him upon finding him alive.

With a mob surrounding him, Luqman Qureshi can be seen sitting cross-legged, resigned to his fate as people from the crowd hand him a blow after blow in Gurugram in the National Capital Region of India- all filmed by the perpetrators themselves. Beaten over the suspicion of transporting ‘cow meat’, 25-year old Luqman belonging to Ghasera village in the North Indian state of Haryana, was then seen lying on a road besides his truck in an unconscious state, with Police and onlookers indifferent to his plight.

He was beaten over suspicions of transporting meat of cow- a highly revered animal in Hindu traditions.

“They thrashed him with sticks and broke his bones with a hammer. When he would become unconscious they would sparkle water on his face and check he if is still breathing. They would restart beating him upon finding him alive,” said Mushtaq Qureshi, brother of Luqman who is yet to come to terms with the condition of his brother.

Luqman used to transport buffalo meat every morning from a village in Mewat district in a pickup truck and deliver that to some shops in Gurgaon.  “As usual, he left his village at 4 am but when he reached the Badshahpur area in Gurugram he was asked to stop by a group of around 20 people who had batons in their hands. Fearing trouble, he didn’t stop but they began chasing him. On the way, he dialed the police and sought their immediate help but they did not turn up,” said Qureshi.

As per family members of Luqman, after failing to get Police help, he called one of the shop owners whom he used to deliver meat , who suggested him to come near his shop in hope that assailants would hesitate to beat him in a ‘Muslim’ area. “But as soon as he stopped his pickup there he was caught and attacked by the people who were chasing him. They thrashed him badly, with sticks and hammer. Police personnel also came there but they did not interfere and let them beat him.”

Police Commissioner of Gurugram, KK Rao, however, refuted the allegations of police negligence. “There were a lot of people there (beating him) and it wasn’t easy to rescue him.  But we acted swiftly and admitted him (Luqman) to a hospital. We have also arrested the four suspects and search is on to nab others,” he said.

Mushtaq believes that presence of so many people so early in the morning points out to a pre-meditated attack by rightwing goons. “They were also forcing him to chant Jai Shri Ram. (a Hindu slogan in praise of deity Ram)” Qurshi said.

“For three hours we had no idea where Luqman was. After lots of struggle, we came to know that he was in police custody in Gurgaon but the police kept refusing to hand over him. It was only after a local member of State Assembly called Police that he was handed over to the family,” he added.

In India, ever since the rightwing Bhartiya Janta Party (BJP) came to power in 2014, there has been a discernible spurt in incidents of violence against Muslims over suspicions of slaughtering and transporting cow meat.

“From a year or so there was a lull in number of cow vigilante attacks, but now these attacks have resumed. It is clear that these attacks by rightwing groups are meant to polarize masses in a bid to divert attention from the failures of their government vis a vis handling of economy and coronavirus pandemic,” says Zafar-ul-Islam Khan, former Chairman of the Delhi Minority Commission.

Islam believes that attacks on minorities should not be seen in isolation rather as ‘well-planned’ and ‘premeditated’ to suit the agendas of the current dispensation.

Last year, in a similar incident, 31 year old Rakbar Khan was lynched by a mob in northern state of Rajasthan for allegedly smuggling cows- creating a huge uproar against the government . In another incident in 2017, a mob killed a daily farmer Pehlu  Khan while he was transporting cows along with his family members  to his village.

Experts also believe the complicit nature of justice in the past wherein people accused have been set free and in some cases honoured by the leaders of ruling Bhartiya Janta Party (BJP)  has lend a certain air of validation and legitimacy to the vigilante mobs. “An incident such as this one can be termed as a crime but when these incidents are deliberately orchestrated with cops acting as mere spectators, it can be termed as a state endorsed act, consequences of which, in the long run are going to be disastrous for a country where fault lines between majority community and minorities have now extremely widened,” said Dawood Ashfaq (name changed), a Muslim activist based in New Delhi.