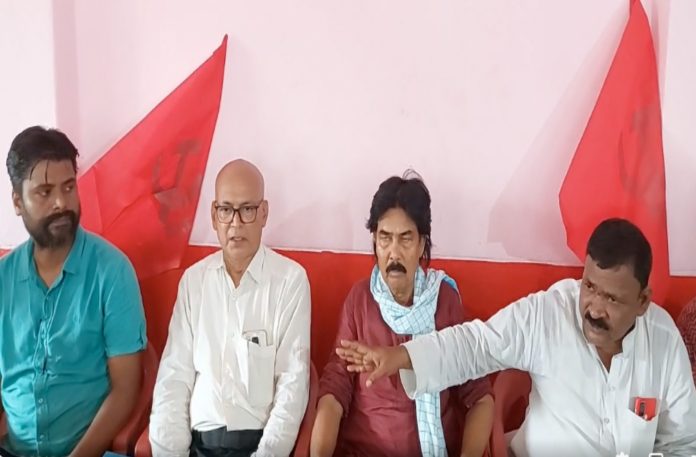 A team comprising of members of Communist Party of India – Marxist Leninist  (CPIML) and two other groups on Thursday issued a report dismissing police allegations against Muslim men arrested in connection with an alleged terror module from Patna’s Phulwari Sharif.

The team visited families of four accused and collected crucial details about their past. They found that they were, in no way, associated with any anti-national or terrorist activity.

“There is not a single strong evidence against men arrested on charges of being involved in terrorist and anti-national activities,” the report said.

The team, which visited the affected families, comprised of the members of Insaf Manch and All India Peoples’ Forum apart from CPIML.

CPIML MLAs – Mahboob Alam and Sandeep Saurav- were also part of the team.

They slammed Bihar CM Nitish Kumar for his silence on the issue. They alleged that the arrests are part of the BJP’s plan to win the 2024 parliamentary elections.

They added that the entire Muslim community is being targeted by portraying Phulwari Sharif as a hub of terror activities.

Findings of the report

1. After talking to the relatives and local people of the accused and visiting the Ahmed Palace, the place provided for the PFI’s office, the investigation team did not find any concrete evidence about involvement of the above-mentioned four people in terrorist or anti-national activities. The team also asked ASP Manish Kumar for evidence in this regard, but they too could not show any concrete evidence.

2. On being asked that if the police were already aware of the terrorist and anti-national activities being carried out at the rented place by Jalaluddin Khan, why did they not take action earlier? ASP had no answer to this. They also could not answer why the place was not sealed after the arrest on July 12.

3. Jalaluddin Khan had rented the Ahmed Palace to Athar Parvez some two months ago, whose agreement is also there. It is currently under construction. In a room of about 600 square feet, with two peelers inside, how can there be a knife or swordsmanship? The entire street side of the room is transparent, then if such action continues and people do not know, how is it possible? ASP could not tell anything about it either. They just kept saying that illegal acts were done under the guise of martial arts.

3. The ASP accepted that these arrests were made on the basis of suspicion. Then when the entire Phulwarisharif and Muslim community is being targeted on this basis, then they could not give any answer on what steps the administration took to stop it.

5. Shahid Parvez, brother of Athar Parvez told that some SDPI flags were caught by the police from his house and some property dealing papers. Athar Parvez’s younger brother Manjar Parvez was arrested long ago in the SIMI case and then he was released in disgrace. This family has nothing to do with the Gandhi Maidan bomb blast case, which is being widely publicized. ASP also accepted this fact.

6. The arrested Margub is 75 percent mentally ill, he has a mobile addiction. He has never gone abroad, which is being tossed a lot. He has been arrested for running some WhatsApp groups of Ghazwa-e-Hind. If he can be arrested in such a case, then why is the administration silent about those who swear day and night to make the country a Hindu Rashtra and kill the Constitution?

Demands made by CPI(ML), other groups

1. The administration should present evidence in front of the public in connection with all the five accused, so that the confusion ends. No innocent should be arrested.

3. This entire action is also being linked to the Prime Minister’s visit to Bihar. The investigation team considers this to be a well-planned ploy of the BJP. So Nitish Kumar should break his silence and get the matter investigated from his end.