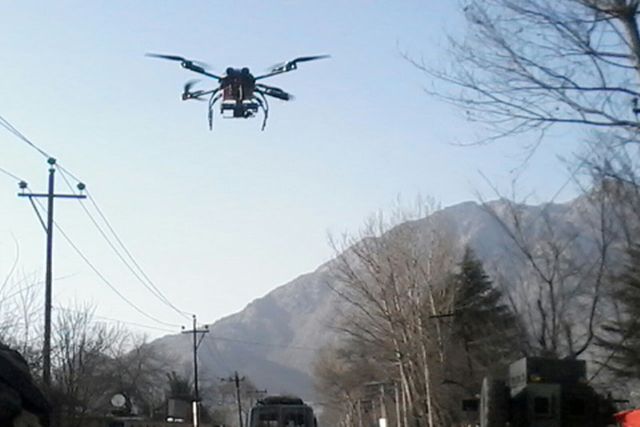 New Delhi : The Central Reserve Police Force (CRPF) is all set to purchase 25 high-end drones to equip itself to better conduct anti-Maoist operations and deal with militants in Jammu and Kashmir.

The tendering process for the procurement of the drones has started and they are expected to be introduced by the CRPF – the country’s largest paramilitary force – in the next three-four months, a Deputy Inspector General-rank officer told IANS on the condition of anonymity.

A pre-bid conference for the procurement of the drones was held on September 12, 2017, and the online and offline tender was opened on October 26, 2017, with a validity of six months.

These drones — each costing around Rs 15 lakh — are being purchased to help the CRPF personnel during surveillance, reconnaissance and detection in day and night operations in Jammu and Kashmir and in the dense forests of Maoist-hit states like Chhattisgarh, Jharkhand, Andhra Pradesh, Telangana, Madhya Pradesh and Maharashtra.

The 25 new drones will join CRPF’s existing fleet of 40 and help the force get real-time inputs and avoid attacks on its troopers.

“The drones will have the capacity to integrate geo-referenced master maps — provided in at least one of the commonly used digital map formats — with real-time and clear video during flights at heights of around 250 metres. They will also have better quality zoom control and thermal imaging for night operations,” the CRPF official said.

He also said that the new drones would be able to detect human-sized targets at 300 metres or more and have additional features when compared to the CRPF’s existing Indian-made light drones, named “Netra”.

The move is part of CRPF Director General R.R. Bhatnagar’s focus on better equipping the force and improving its infrastructure, the official said.

The tender, issued on August 25 last year with the submission date on January 2, invited an “online global tender” in a two-bid system for the supply of 25 micro Unmanned Aerial Vehicle (UAVs).

The 57-page tender notification seeks a two-year guarantee from the manufacturers, who have to supply the drones within 90 days of winning the contract.

The notification says the tendering firms have to register with the National Small Industries Corporation to undergo re-verification of their manufacturing capacity and clarifies that in case of denial for re-verification, they will be disqualified.

“All the tenderers are required to demonstrate the equipment and product offered by them before a board of officers (to be detailed by DG CRPF) at 201 Cobra Battalion Headquarters… (Chattisgarh) for assessing the technical suitability and performance of the equipment as per tender enquiry specifications.

“Offers of those firms are liable to be ignored, whose equipment or product are not found as per tender enquiry specifications. Price bids of only those firms will be opened whose technical bids as well as performance of their equipment so demonstrated are found acceptable as per requirement,” says the notification.

Training of 75 CRPF personnel to handle the drones and minor repairs at the 4 Signal Battalion of the force in Neemuch, Madhya Pradesh, are part of the conditions laid down in the document, another CRPF officer said.

According to the officer, although the Maoist threat has diminished with the security forces increasing their “area dominance”, intelligence reports suggest they are trying to reorganise themselves – and high-end gadgets like the drone will help in fighting them.

The over 300,000-strong CRPF is mandated to provide internal security in Jammu and Kashmir and Maoist-affeted areas.

(Rajnish Singh can be contacted at rajnish.s@ians.in )