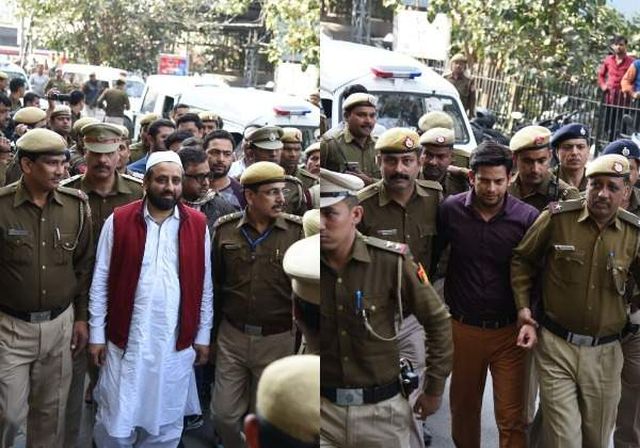 On Wednesday, Metropolitan Magistrate Shefali Barnala Tandon refused a Delhi Police plea for police custody of Khan and Jarwal and said their bail pleas will be taken up on Thursday.

While Jarwal was arrested on Tuesday night, Khan surrendered at a city police station on Wednesday.

This came after the Chief Secretary alleged that he was beaten up by the two MLAs in the presence of Arvind Kejriwal at the Chief Minister’s residence on Monday night, where he had been called for a meeting.

On Tuesday, Delhi Environment Minister Imran Hussain was manhandled at the Delhi Secretariat by a crowd protesting against the alleged assault and his Personal Secretary Himanshu Singh was beaten up, according to multiple video clips from the Secretariat.

Medical examination reports on Wednesday revealed injuries both on the Chief Secretary and the Minister’s aide.

The Chief Secretary paid a visit to the Prime Minister’s Office on Wednesday evening, but did not brief on what transpired in the meeting at the PMO.

On Wednesday evening, the senior officer did not turn up for a Delhi Assembly committee meeting which AAP Chief Spokesperson Saurabh Bharadwaj said was “contempt of Assembly” and the committee was thinking of initiating “contempt proceedings” in the matter.

Bharadwaj said the Chief Secretary and two other IAS officers did not turn up because of an IAS Association’s decision on Tuesday that officers will not meet or talk on phone with the Chief Minister or his Ministers or party MLAs till Kejriwal apologised and took action on the alleged assault.

Informed sources told IANS that as far as they knew, Indian Administrative Service officers did not have any meetings at all with Delhi Ministers on Wednesday, going by their decision.

The Chief Secretary’s medical examination revealed “mild swelling behind both ears” and “bruise over lower lip”. The report termed the nature of injuries “simple” and the weapon used as “blunt”.

Meanwhile, the ministerial aide’s medical report shared by a Delhi government spokesperson revealed “multiple bruises seen all over back, linear in shape”.

Speaking about the Chief Secretary’s absence in the Assembly meeting, Bharadwaj said: “The Committee members feel that against all these people and against IAS Association leaders, contempt proceedings have to be taken up. The committee has not taken a decision yet, but will think about it.”

The MLA said that the Chief Secretary was supposed to come for the meeting at 5 p.m., but he and two other IAS officers did not turn up despite the panel waiting for them till 6.15 p.m.

Earlier in the day, Kejriwal’s adviser V.K. Jain was questioned at the Civil Lines police station and let off.

The alleged assault on the top bureaucrat triggered a political storm on Tuesday, with the opposition Bharatiya Janata Party (BJP) demanding Kejriwal’s resignation and the Congress seeking his apology.

The AAP hit back by accusing the Chief Secretary of making false allegations and said he was working at the “behest of the BJP”.

The Home Ministry sought a report from Lt Governor Anil Baijal as Union Home Minister Rajnath Singh said he was “deeply pained” by the development. The L-G has since submitted a report on the issue to the Home Ministry.

IAS Association Secretary Manisha Saxena told IANS that they would stick to their decision of not meeting Delhi Ministers.