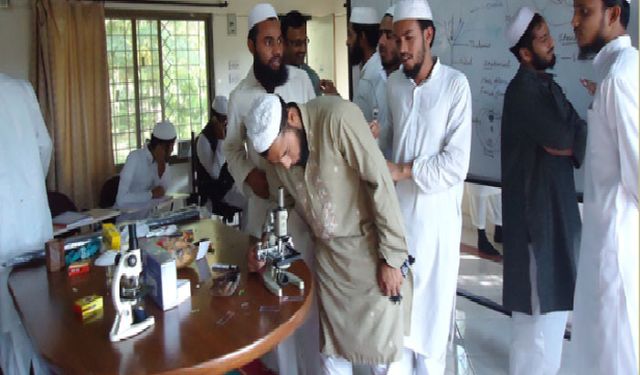 Srirangapatna (Karnataka) : Surrounded by a cluster of coconut trees and at a stone’s throw from the tomb of 18th century ruler Tipu Sultan in this town near Mysuru, Darul Umoor at first glance looks like a farmhouse. But inside, it is a unique coming together of science and spirit, imparting scientific knowledge and nurturing multiple skills and abilities while promoting Islamic knowledge for a holistic view of life.

Turning madrassa graduates into change agents of society, Darul Umoor — The Tipu Sultan Advanced Study and Research Centre — is known as one of the first institutions to train madrassa graduates in modern subjects like management, history, biology, physics, chemistry, banking, personality development and leadership skills, along with knowledge of computers and English language. It offers an intensive one-year course with the help of a number of experts and retired professors in their fields.

Every year thousands of students graduate from a large number of madrassas across India, but critics say they only have religious knowledge, imbibe fundamentalism and don’t have a grip on modern subjects. Darul Umoor is trying to fill this knowledge and perception gap.

Abdul Rahman Kamaruddin, general secretary of Darul Umoor, says the one-year programme is aimed at creating a well-informed, scientifically-oriented professional cadre to serve the community and the nation.

“Our dream is to train ulema (Muslim scholars having specialist knowledge of Islamic sacred law and theology) to take up both scientific and administrative positions and also act as community leaders specialised in not only religious subjects but in other subjects as well,” Kamaruddin, who worked as an adviser to Unesco and the United Nations Industrial Development Organisation (UNIDO), told IANS.

“They will also act as community leaders to guide and support the educational and economic development of the neighbourhood and strive at giving the right perspective of Islam and opportunities available in the country,” he added.

According to Kamaruddin, Tipu Sultan believed that all his staff should have good training in worldly affairs as well as religion, and Darul Umoor is a reflection of that thinking.

Without any public donation, the institution is run through the good offices of Bangalore-based philanthropist Ziaulla Sheriff. Students don’t have to pay anything for tuition or the mess because everything is free and they also get a scholarship of Rs 1,000 per month.

Mohammad Hazique Nadvi, academic director of Darul Umoor, argues that its graduates are seen as leaders and guides in the community and some of them even play that role.

He says that, in the beginning, some clerics doubted the style of Darul Umoor’s functioning because they were concerned that whatever they taught their students in seven to eight years would be washed away by this new institution.

“But due to the continuous guidance of a number of notable clerics, the institution has earned a good reputation across all schools of thoughts in the community.”

Every year, about 30 students are selected through a written test and interview. These students come from the top madrassas of the country and also a few from Nepal. Their daily journey starts with the dawn prayer followed by a warm-up exercise. Then, as part of their routine, they teach moral science and Urdu to children in a nearby government school.

After breakfast, the first academic session starts with newspaper analysis and study of contemporary issues, followed by a lecture series on comparative religion, history, science and the English language. The afternoon session, of two hours, is for computers and information technology.

Thursday is kept for field work, which includes a tour of slums, hospitals and sometimes centres of other religions.

The institution also provided space to M Power, an IT company in Bangalore, for professional training to newcomers in the IT sector. The company used the campus and facilities of Darul Umoor and trained about 100 IT professionals in five batches. One batch has to be trained for three months. They have separate classrooms and training, but each IT graduate has to befriend one madrassa student, which helps in further enhancing their knowledge about society, language, culture and religion.

Darul Umoor also focuses on training its students to be good public speakers. Kamaruddin says that there are over 300,000 mosques in India where about 70 to 80 million Muslims go for Friday prayer as “united captive audience” to listen to the sermon.

Kamaruddin says that so far more than 370 scholars have been trained by Darul Umoor and are spread all over the country and abroad, and are making significant contributions both in their work and in social services.

“They are working in various capacities like professors, teachers, IT professionals, journalists and so on, in addition to becoming eminent religious scholars and teachers of Islam,” Hazique adds.

Mohammad Athar is one of those who graduated from Darul Umoor in 2006 and is now teaching in MES Indian School in Doha, the capital of Qatar.

“Darul Umoor equipped me with broader thinking and imagination and also gave me a lot of confidence,” said Athar, who graduated from the prestigious Darul Uloom Deoband.

“Apart from learning subjects like computer, accountancy, management, history, banking and website designing, it was a platform for me where I learned how to talk to people and how to address people in a big gathering confidently,” he added.

Kamaruddin says that to achieve the aim of Darul Umoor, more such institutions should be started all over the country.
Hazique is hopeful that sooner or later, more madrassas will adopt the path of Darul Umoor. About 10 madrassas in the country are already doing so.

According to Kamaruddin, their goal is to establish an international university — Tipu Sultan University — to impart knowledge as an integrated presentation of scientific and spiritual learning.

“It is yet to take off fully. However, the nucleus of the Tipu Sultan University has been planned at Srirangapatna,” Kamaruddin said.

(The weekly feature series is part of a positive-journalism project of IANS and the Frank Islam Foundation. Abu Zafar can be contacted at abuzafar@journalist.com)