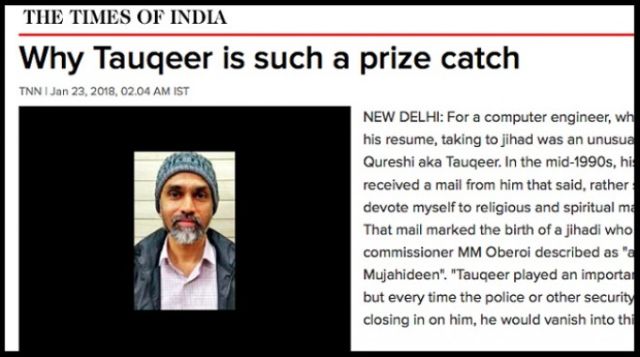 Over ten years three police agencies have contradicted each others’ claims about Tauqeer, but the press faithfully parrots whatever is put out.

So 10 years later, Tauqeer is back to making headlines.

The headlines tell you that nothing has changed in these 10 years. The Delhi Police Special Cell may have been exposed by the Jamia teachers as a force that frames Muslim innocents on terror charges (JTSA: Framed, Damned, Acquitted: Dossiers of a Very `Special’ Cell, 2012); courts may have blasted Special Cell officers for doing the same; some of its officers may have been transferred after allegations of fake encounters and some even killed in dubious circumstances.

But, the English press is still eating out of its hands, as it does with every police agency when it comes to terror suspects.

The headlines that declared Tauqeer’s arrest on Tuesday, January 23, must have warmed the hearts of not just the Special Cell, but also of every police force that’s waiting to interrogate the elusive Abdul Subhan Qureshi, also known as Tauqeer. The Delhi magistrate thought fit to give the Special Cell 14 days’ custody of Tauqeer. Readers now must be prepared for daily tidbits of the (mis)deeds of this “techie turned jehadi’’, as many reports have called him.

“From techie to terrorist’’ was the headline of a box item within The Times of India’s main report. It was the lead story on January 23 in its Mumbai edition. The main headline was “IM co-founder who plotted city, Ahd serial blasts held’’. Note the absence of “alleged’’. The box item said: “Wanted for …Mumbai train blasts…’’

“But, the English press is still eating out of its hands, as it does with every police agency when it comes to terror suspects”

In fact, Tauqeer is not shown as a wanted accused in the 2006 Mumbai train blasts. His entire family was detained by the Maharashtra Anti-Terrorist Squad (ATS) after the blasts. In affidavits which ultimately found their way to the PMO, Tauqeer’s family members detailed how the ATS treated them. Despite such treatment, the ATS couldn’t find any evidence to link him with the blasts.

Two years later, super-cop Rakesh Maria, then head of the Mumbai Crime Branch, claimed that the blasts were carried out by the Indian Mujahideen (IM). But the man arrested by him was discharged by the court after the ATS said they found nothing against him. Incidentally, Maria also dismissed Tauqeer as a “media creation’’.

On Tuesday, The Hindu quoted a RAW officer backing the Delhi Police Special Cell’s press release which blamed Tauqeer for the 2006 blasts. “Our initial inputs were credible and had shown links to the Bihar border. However, the ATS in no time changed the script and came up with this filmi claim,” he said.

It was not clear what he meant by “filmi claim,’’ but these are damning words.

So now, can the 12 who were convicted in 2015 for the train blasts, expect to be freed? They have been claiming their innocence all along. You can’t have two sets of accused for the same crime, has been one of their arguments.

If the press is going to faithfully report the Delhi Police Special Cell press release, it ought to point out this contradiction too.

Mumbai Mirror, in a report titled “India’s `Osama’ held after over 9 years’’, while saying that Tauqeer was suspected of involvement in the 2006 train blasts, immediately pointed out that he had not been charged in them. But then it said that the Maharashtra ATS would seek his interrogation to ascertain his role.

Now, nine years after they had ruled out the IM’s involvement, and two years after the persons whom they had accused were convicted, the ATS was going to find out if Tauqeer was involved in the train blasts? This question should have been put to the ATS, surely? Specially since after the 2008 Ahmedabad blasts, this agency had taken away the computers of Tauqeer’s siblings. Obviously they found nothing in them.

The Hindustan Times gives an even more peculiar reason for the ATS wanting to interrogate Tauqeer: to ask him if he visited Mumbai after the 2008 Delhi and Ahmedabad blasts.

Considering that in 2008, all newspapers were carrying details fed to them by the police about Tauqeer’s travels across India and even in PoK and Bangladesh, it’s odd that the Maharashtra ATS didn’t know if he had visited Mumbai! And what if he had? Do they now want to find out if they had been caught napping?

This question too wasn’t asked of the ATS by any newspaper.

In this HT report, which was carried in the inside pages, the two cases against him filed by the Maharashtra ATS are mentioned. They do not include the train blasts. Yet, para 4 of HT’s main lead on Tuesday says he is “suspected to be involved in the Mumbai train bombings’’.

The 2006 train blasts were one of Mumbai’s life-changing events, covered extensively in the press. All crime reporters and others who cover terror would remember the conflicting claims regarding the perpetrators by the ATS and the Crime Branch. They would also remember the mobile records of the accused presented in court by the defence, showing that three of them had not been on the scene. The ATS, which had relied on these records to seek custody of the accused, had refused to produce them and even claimed that it had destroyed the records.

To add to all this, the verdict in the case is just two years old, hardly likely to have been forgotten.

Finally, there’s the book by the only accused to have been acquitted in the serial blasts case. Abdul Wahid Shaikh has written a book `Begunah Qaidi”, a comprehensive account of how he was framed. The book claims to prove the innocence of his co-accused. Every newspaper has interviewed him.

Despite all this, the Mumbai press chose to publish the Delhi Police Special Cell’s press release without pointing out the previous contradictory claims made by the Maharashtra ATS which handled the case, and the Mumbai Crime Branch. Had it done so, readers would have at least been able to be sceptical about the Special Cell. But only the Hindu’s Vijaita Singh pointed this out.

By not doing so, not only has the press shown yet again, that it just takes police dictation despite knowing facts to the contrary, but it has also done a gross injustice both to Tauqeer and his family, as well as the 12 convicted of the blasts. Five have been sentenced to death, seven to life imprisonment. Obviously, either Tauqeer is guilty, or these 12.

Here it must be pointed out that Indian Express did contradict another of the Delhi Police Special Cell’s claims in its front page report. The Delhi Police said that Tauqeer “operated an IM module involved in blasts across the country.’’ In the very next sentence, the IE report said: “The National Investigative Agency (NIA) has not mentioned Tauqeer in its three charge sheets filed in the IM blast probes.’’

Fortunately, the Indian Express, Hindustan Times, The Times of India and DNA also interviewed Tauqeer’s parents. But again, the Indian Express and DNA had a different version from that of the Times and HT. To everyone, his father maintained that Abdul had not been in touch with him since the last 12 years. Indian Express quoted him as saying: “If the Delhi Police has arrested him, he should be brought to justice’’, but adding: “While the police claim he was into terror activities, I don’t think so. He used to teach kids.’’

DNA quoted the father as saying he was “happy’’ with the arrest, because “the court will declare him innocent.’’ His mother also repeated that he was falsely implicated.

But Hindustan Times had no such denial attributed to the father. The mother said nothing to the paper, just wept.

The TOI got a completely different quote from the father. It quoted the father as saying he was unhappy with his son and would never meet him, but the mother insisted she would, as she believed he was innocent, but had got into bad company.

These differences could be attributed to the individual reporters’ interaction with the parents. After all, Tauqeer’s parents are not cops, whose utterances are reproduced verbatim!

While all newspapers went to town over Tauqeer’s arrest, there was a not-so-subtle difference in the way the TOI and HT portrayed him. After reading the three reports by Rajshekhar Jha in the TOI, readers would have made up their mind about this “jihadi bomber’’ who used his computer expertise for all the wrong causes. The reason: his deep-rooted hatred for India, as proclaimed in this headline: “Ex-SIMI leader a skilled recruiter, has deep-rooted hatred for country’’.

“Surely editors know the damage done by such police-dictated reports to innocents who have been framed? “

One searched in vain in these three reports for words such as “alleged, suspected, said to have been’’ which were used by other papers.

HT used the word “suspected’’ in its headline. But it depicted Tauqeer’s arrest in graphics that showed him firing shots. By doing so, it gave further credence to the Special Cell story of the arrest. Interestingly, though 14 rounds were exchanged, no one was injured. And this was a man who had “designed courses to include skills in pistol firing’’, and organised 12 training camps across the country to impart these skills, according to Rajshekhar Jha, TOI.

So again we come back to the question this reporter has asked over and over again: why does the press swallow the police’s story when it comes to terrorist crimes, even after the police have been found to have framed innocents?

If crime reporters can’t afford to alienate their police sources, why can’t editors assign another set of reporters to dissect police claims, and publish their findings at least on the next day? Surely editors know the damage done by such police-dictated reports to innocents who have been framed? Is it any wonder that most Muslim readers of the non-Urdu press refuse to believe these reports? That doesn’t bother English newspapers?

(Jyoti Punwani is an independent journalist based in Mumbai)