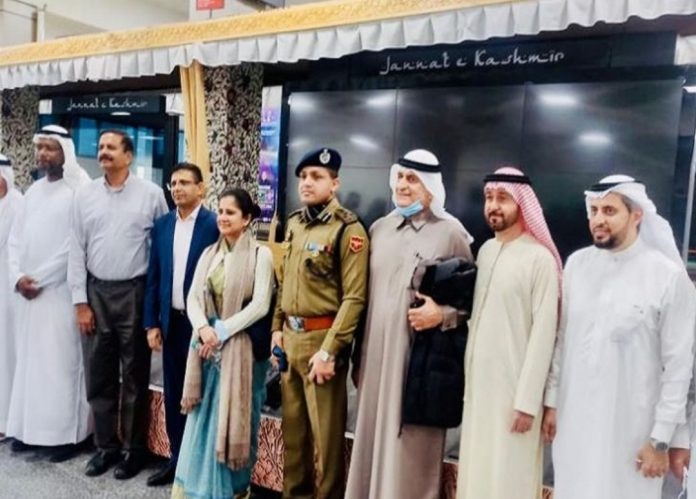 On Sunday afternoon, a high level international delegation, largely from the Gulf Cooperation Council (GCC) countries, arrived in Kashmir for a four-day tour.

The delegates will attend the “Gulf Business Summit” on March 22 and discuss exploring investment prospects in various industries in J&K, according to officials.

Jammu and Kashmir: 36-member delegation from the Gulf countries arrived in Srinagar to strengthen ties and look at the investment opportunities in the region.

📸LG Manoj Sinha hosted dinner for entrepreneurs, CEOs from Gulf countries who are on 4-day visit to #JammuAndKashmir . pic.twitter.com/1QEA92Tjw8

Ayman Abdulrahman S Alhilali, CEO of Saudi Arabia’s Alpha Sky, is also in attendance. This is the first time a Saudi Arabian investor has expressed interest in J&K.
Al Maya Group, MATU Investments LLC, GL Employment Brokerage LLC, Century Financial, Noon E-commerce, Magna Waves Pvt. Ltd, Emaar Group, and Lulu International are some of the companies which are expected to invest in the region, according to officials.

Earlier in January, The Union Territory of Jammu and Kashmir signed six agreements with global investors at Dubai Expo 2020 to bring in investments in a variety of industries, including real estate, infrastructure, tourism, and healthcare.

According to some media reports, Pulwama and Pampore in South Kashmir are emerging as hotspots for investors, with over 5,000 kanals of land up for grabs.

Meanwhile, the delegation drew criticism from several people for “Shaking hands with the criminals”.

The UAE delegation that arrived today in Indian occupied Kashmir is shame for you. Shaking hands with the criminals proves again, You are the enemy of humanity and Muslim's. Laanth ho tum logo pr

“India continues to murder & rape Muslims yet a UAE delegation are happy to invest through the terrorists and contribute towards eliminating Muslims without even uttering a word for thr persecuted. Is this our Ummah?” A Kashmiri activist wrote on Twitter.

“Soooo they’ll care about investment in Kashmir but not the ongoing human rights abuses? Sounds about right. These so-called “Muslims” only care about $$$.” Another social media user wrote.