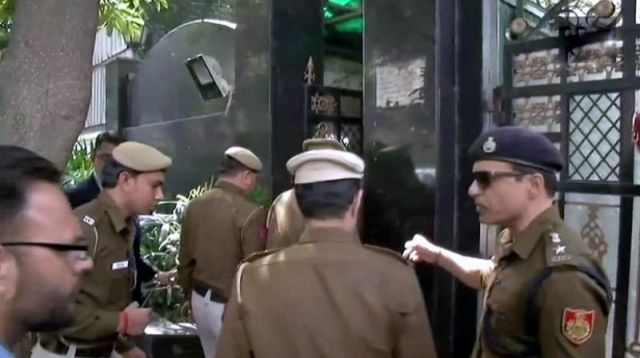 Additional Deputy Commissioner of Police Harendra Kumar Singh told IANS that the “raid” was underway and police would be looking for CCTV footages besides questioning staff regarding the alleged assault.

The Aam Aadmi Party termed the action “police raj” and said that there was no “intimation” prior to the search.

Kejriwal told reporters outside his residence that he was “happy that the investigation is taking place” but said that they probe agencies should also garner “courage to question (BJP chief) Amit Shah” in the Justice Loya death case.

“A lot of police has been sent to my house. Investigation is going on in my house. It is a good thing,” Kejriwal later said in a tweet.

This was the first time the Chief Minister has responded to the allegations on the assault.

Kejriwal also said in another tweet that his Council of Ministers has sought an appointment with the Lt. Governor Anil Baijal later in the day.

The Delhi Police is under the jurisdiction of Baijal.

“CM house taken over by police. Huge number of police force enters CM house without any intimation. Police Raj kills democracy in Delhi. Police spread all over inside CM house.

“If this is what they can do to an elected CM, think what they can to poor people,” Deputy Chief Minister Manish Sisodia’s media advisor Arunoday Prakash said in a tweet.

Earlier this week the Delhi Chief Secretary had alleged that he was beaten up by Amanatullah Khan and Prakash Jarwal — Aam Aadmi Party MLAs — in the presence of Kejriwal at the latter’s residence on Monday night.

Prakash on Tuesday said the incident took place when he was summoned to attend an emergency meeting at Kejriwal’s home.

On Thursday, the Chief Minister’s adviser V.K. Jain told police that he saw Khan and Jarwal “physically assault” the Chief Secretary, according to Jain’s statement recorded by the Delhi Police.

Later in the day, Khan and Jarwal were sent to judicial custody for 14 days by a Delhi court.

Scores of Delhi government employees across the city started a silent protest on Thursday to mark their support for the Chief Secretary.

The IAS Association is heading the protest. Delhi government employees have decided to observe a five-minute silence outside their respective offices every day till steps were taken to “ensure safety and dignity” of government staff in the city.

Bureaucrats had also taken a decision that they would not meet or talk over phone to the Chief Minister, his ministers or MLAs till Kejriwal accepts and apologises for the alleged assault and takes action.