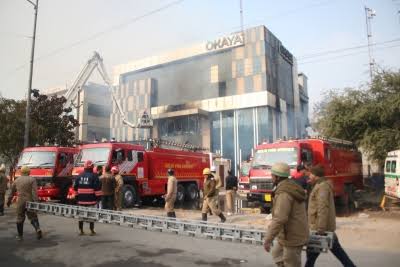 New Delhi, Jan 2:The Delhi Fire Service will on Friday pay tribute to its firefighter, who died after being trapped in the debris of a burning factory building, at the Fire Safety Management Academy at Rohini, where he was trained six months ago.

“It is our tradition that we pay tribute to the firemen who risk their lives for the society. So we will be paying tribute to Amit Balyanat 7.30 a.m. on Friday,” Delhi Fire Services chief Atul Garg said.

Balyan had succumbed to injuries after he got trapped under the debris for about 9 hours at a battery manufacturing factory on the city”s outskirts.

Eighteen other people, who were rescued from the building, have been admitted to a nearby private hospital.

Balyan, a resident of Shahdara, was the last man brought out from the collapsed building.

His father is an Assistant Sub Inspector of the Delhi Police and is posted at Anand Vihar police station, while his wife is also in the police, being a constable in the Uttar Pradesh Police.

Balyan was among the 500 new entrants in the Delhi Fire Services, joining after a four-year-long selection process. He was posted in the Kirti Nagar fire station for almost six months now after completing his six-month-long training period.

According to officials on the spot, the fire in the two-storey building started from the basement on Thursday morning and engulfed the whole building soon. Seven fire tenders were rushed to the spot, but at about 7 a.m., a blast wracked the building, causing a major portion of it to collapse.

Officials are yet to comment on the reason for the blast, but initial reports say that battery items stored there may have caused it.