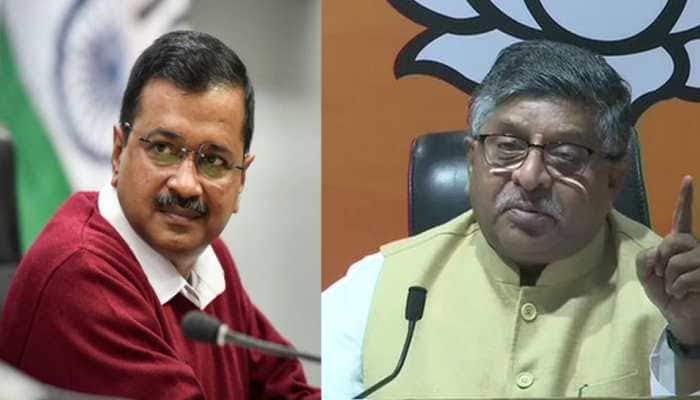 NEW DELHI: Union Minister Ravi Shankar Prasad on Friday alleged that the Delhi government is under the control of the ration mafia and the chief minister should explain why is he opposing the Centre’s ‘One nation, One ration card’ scheme.

Addressing a press conference in the national capital, Prasad said, “Arvind Kejriwal is talking about home delivery of ration when he even failed to provide oxygen to the people of Delhi. The Delhi government is under the control of the ration mafia.”

Arvind Kejriwal is talking about home delivery of ration when he even failed to provide oxygen to the people of Delhi. The Delhi government is under the control of the ration mafia: Union Minister and BJP leader Ravi Shankar Prasad pic.twitter.com/QJ26uzo4jd

The senior BJP leader went on to say that “34 States/UTs have adopted the ‘One nation, One ration card’ scheme. Only 3 states -Delhi, West Bengal and Assam – have not adopted it.”

“Arvind Kejriwal should answer why the scheme has not been implemented in Delhi,” the Union Minister sought to know.

Prasad made these remarks days after Arvind Kejriwal urged Prime Minister Narendra Modi to allow the implementation of the doorstep ration delivery scheme in the national capital.

“Till date, I have supported you in all the work of national interest, you should also support us for the same. The scheme should be implemented in the whole country during the COVID times. We are ready to do whatever amendments the Central government wants to make to this scheme. I request you in folded hands on behalf of 70 lakh poor people of Delhi, Sir, please do not stop this scheme,” wrote Kejriwal in his letter to Prime Minister Modi.

Kejriwal had earlier slammed the Central government for putting a stop to the Delhi government`s doorstep ration delivery scheme, asking why, despite writing to the Centre five times, the scheme had been brought to a halt.

In a press conference, Kejriwal had said that all preparations had been made for the scheme.

“Just two days before the `doorstep delivery of ration` scheme`s implementation, the Central government stopped it. If this Ghar-Ghar ration scheme was implemented, the ration mafia would be stopped. The strings of this ration mafia reach right to the top. This is the first time a government has had the courage to stand up to the ration mafia,” he had said.

The scheme was originally named the MMGGRY (Mukhya Mantri Ghar Ghar Ration Yojana) but a notification on March 9 was issued by the Union Ministry of Consumer Affairs that the subsidised food grains being allocated by the department for distribution under the National Food Security Act (NFSA) cannot be used for running any state-specific or other scheme under a different name other than NFSA.