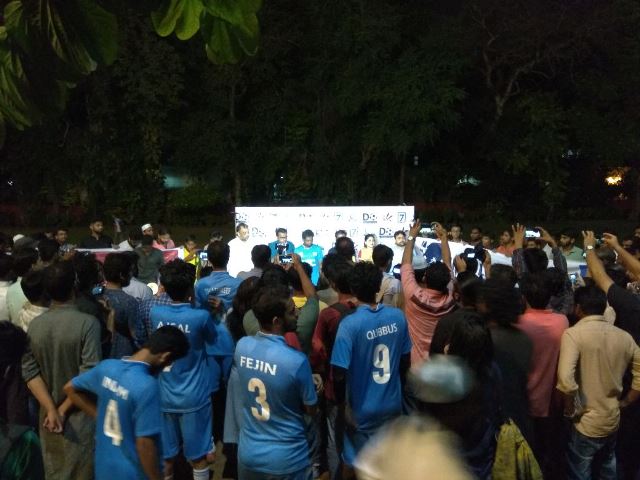 By MuslimMirror.com,
New Delhi: It was not yet another match for Shine Star FC, the football team of Rohingya Refugees in Delhi. The friendly match that held on 24 September between Halqa Super Seven and Shine Star FC became a rare instance where a game connects the people with their memories of lost home and families. Organised by Students from various institutions under the banner of Halqa Sevens football tournament committee in Delhi Kannada school floodlight stadium at late evening, the match also attracted the presence of people from different walk of life, including social activists, students, and football enthusiasts.
Sending a message of brotherhood across the nation at a time of massive persecution and massacre of the community, the football match stood in solidarity and support towards the Rohingya cause.

The floodlight match was inaugurated by Nadeem Khan, a social activist and a prominent face who attends to Rohingya refugee’s issues in the capital.
Several distinguished personalities including Siraj Talib, state President of Welfare party of India and Sadath Husain, YFDA JNU and media persons from Delhi were present at the occasion.

The game began around 7:30 pm, in which Halqa Sevens FC made 5-2 win over Shine Star Rohingya FC.  Ali, Abu, Kubaib, and Ajsal Scored for Halqa Sevens FC while Captain Sirajullah scored a brace for Rohingya FC also and both teams showed a healthy football before the crowd.
Though the Halqa Super Sevens FC won the match, the smiles were on the Rohingya faces and audiences.

The audience included students from different educational institutes in Delhi including Delhi University, Jawaharlal Nehru University, Jamia Millia Islamia, Aligarh Muslim University, Amity University, AIIMS, South Asian University and IIT Delhi etc.
The event witnessed wide audience comprising Rohingya refugees living in temporary camps at Shramvihar and Madharpur Kader Delhi.
Friendly Football match felicitated Ali Jouhar, a young Rohingya refugee who became the runner-up for People Choice leader award 2017 by International Youth Committee in the South Asian Youth summit.
Al Shifa Hospital Director Kamaruddin handed over the memento to him.  Friendly Match Mementos were distributed among Players, Referees.
Social Activist Shama Khan was also awarded for her genuine and honest work doing in Rohingya Refugee Camps.
This was the first program held in the capital which gave an equal respect and importance to the Rohingya refugees and it was also a creative gathering in solidarity with the victims of ongoing Rohingya crisis. The audience raised slogans like  “WE ARE ROHINGYA, WE ARE WITH ROHINGYA” and both teams played with jerseys printed slogan “IN SOLIDARITY WITH ROHINGYA”.
The Friendly Football match and programs were led by a group of students, which included Ahdas, Nazeel, Ishaque  (DU) Waseem, Jalees (JNU) Aslam , Muhsin(Amity) Thashreef, Salim (Jamia) and Salim, Ataullah from Refugee Camp.
Muhammed Shihad, General Manager of  Halqa Sevens Football gave the vote of thanks to the entire team members, managers, supporters and audience who were present there in support of the cause.