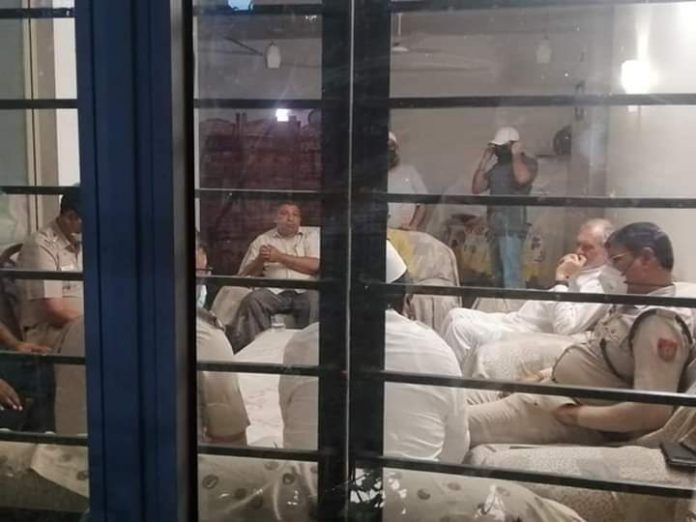 New Delhi, May 6 : The Delhi Police Cyber Cell on Wednesday conducted raids on Zafarul-Islam Khan, the Chairman of the Delhi Minority Commission, in connection with a case registered against him over his alleged seditious remarks on social media.

“The team was looking for the mobile handset used by him to post content on social media platforms,” sources in the agency said.

Speaking to IANS over the phone, Islam”s counsel Vrinda Grover confirmed the raids on her client. “The raids have concluded and the police team has now left. We have asked the enforcement agency to work in accordance with the law.”

In a statement, Grover said: “You are informed that Dr. Zafarul-Islam Khan is a senior citizen of 72 years age and he suffers from old age related physical illnesses that make him extremely vulnerable to the Covid-19 coronavirus.”

Grover further added that the law, as per Section 160 of the CrPC, mandates that the police cannot compel attendance of a person above 65 years age at any place other than their residence for the purpose of investigation and interrogation.

“You are required as per law to question/interrogate Dr. Zafarul-Islam Khan only in his residence and you cannot compel him to go to any police station. As Dr. Khan”s lawyer, I am hereby placing on record that as per law you cannot compel him to go to the police station. That would violate the CrPC and amount to illegal police action against the rights of my Client,” she said in a statement.

Khan had on April 28 posted a comments on his Facebook page on atrocities of Indian Muslims  “Mind you, bigots, Indian Muslims have opted until now not to complain to the Arab and Muslim world about your hate campaigns and lynchings and riots. The day they are pushed to do that, bigots will face an avalanche,” Khan had written on Facebook.

Delhi Police Special Cell registered the FIR on the complaint of a Vasant Kunj resident. According to the FIR, a copy of which is with IANS, Khan has been booked under several sections of the Indian Penal Code — 124 A (sedition) and 153 A (Promoting enmity between different groups on grounds of religion, race, place of birth, residence, language, etc,).

Meanwhile, a Public Interest Litigation (PIL) has been filed in the Delhi High Court seeking his removal from the post over his alleged seditious remarks.

The plea filed by Subhash Chandra through Suprmeem Court Advocate Alakh Alok Srivastava alleged that despite holding a responsible post of Chairman of the Delhi Minorities Commission, Khan given a direct threat of inciting foreign attack on India.

“…a bare perusal of the aforesaid public statement made by the Respondent No.4 categorically reveals that Respondent No.4 has brought hatred and contempt and has excited disaffection towards the sovereignty of India by instigating the foreign countries to wage war against India,” said the plea which is likely to be heard on May 11.

Who is Dr. Zafarul Islam Khan and what is his crime?