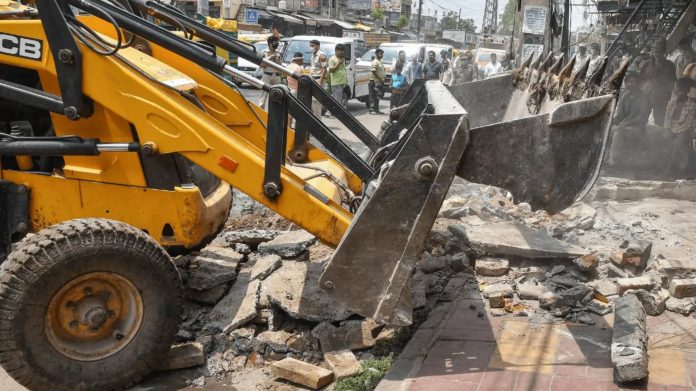 New Delhi : The Uttar Pradesh government has told the Supreme Court that the plea against the recent demolition of houses is an attempt to give a mala fide colour to a lawful action taken by the local development authorities as per the procedure established by law.

The state government in an affidavit, said: “Lawful action was taken by the local development authorities as per the procedure established by law.”

It added that the plea filed by the Muslim body Jamiat Ulama-I-Hind cherry-picked one-sided media reporting of a few incidents and extrapolating sweeping allegations from the same against the state government.

“It is submitted that the said demolitions…have been carried out by the local development authorities, which are statutory autonomous bodies, independent of state administration, as per law as part of their routine efforts against unauthorised/illegal constructions and encroachments, in accordance with the UP Urban Planning and Development Act, 1972,” said the affidavit.

The state government justified demolitions, which were carried out in Prayagraj and Kanpur following protests against the BJP leaders’ remarks on Prophet Muhammad.

The state government said that the allegations are completely false and misleading, and none of the actually affected parties have moved the top court in connection with the lawful demolition actions. It further added that the petitioner has deliberately obfuscated the true facts to paint a nefarious picture of alleged mala fides on the part of the administration, and that too, without stating any facts on affidavits.

“The petitioner, Jamiat Ulama-I-Hind, has failed to place on record the facts duly supported by affidavits and has merely hand-picked certain media, reporting to make unfounded allegations against the state machinery and its officers, and seeks sweeping omnibus reliefs unfounded in either law or fact,” the Uttar Pradesh government said.

The state government, in connection with the demolition carried out in Kanpur, said the factum of the constructions being illegal, has also been admitted by the two builders over there. Also, in the case of demolition of Javed Mohammed’s house, the state government said local residents complained against the illegal constructions and use of the residential property for commercial purposes for running the office of ‘Welfare Party of India’.

The state government added, “In so far as taking action against the persons accused in rioting is concerned, the state government is taking stringent steps against them in accordance with completely different set of statutes, namely: Code of Criminal Procedure (CrPC), the Indian Penal Code (IPC), UP Gangster and Anti Social Activities (Prevention) Act, 1986, Prevention of Public Property Damages Act; and (iv) Uttar Pradesh Recovery of Damages to Public and Private Property Act, 2020 and Rules 2021.”

The Muslim body Jamiat Ulama-i-Hind, moved the top court against the recent demolitions carried out by the state administration in Kanpur and Prayagraj.

The top court, on June 16, had told the Uttar Pradesh government that demolitions of houses must be done in accordance with the law and not as a retaliatory measure and sought response from it.— IANS