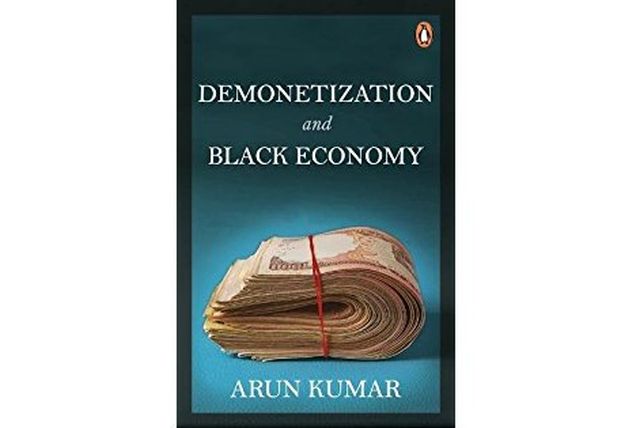 Reams of paper have been inked and gigabytes of data published online lauding, berating, reporting and analysing in breathless fashion the impact of Prime Minister Narendra Modi’s controversial decision on November 8, 2016, to demonetise Rs 500 and Rs 1000 notes.

So what makes this book on the contentious subject by Arun Kumar, a former economics professor at the Jawaharlal Nehru University, relevant a little over a year after the major decision?

In a paragraph, the book cuts away the rhetoric and breathless commentary to provide a systematic argument as to how the move, which was meant to eliminate or largely minimise corruption in India, didn’t live up to its billing. The book also supplements logically articulated arguments with cold facts to make its point that demonetisation was a dramatic, authoritarian and political step taken to fool people, rather than to eliminate corruption.

Arun Kumar also makes a broader point about how the exercise of demonetisation has worsened the already existing deep social divide in the country by triggering a social and economic crisis, painting a grim end-of-the-rainbow picture of political and social instability in the country.

Over 300 pages, the author juxtaposes Modi’s statements and the gradual shifting of goalposts by the government after realising that the biggest demonetisation drive in the world, which was aimed at pulling back 86 per cent of the currency in circulation, was not panning out according to plan.

It also gives a sectoral break-up of the impact of demonetisation as well as delves in detail into how it failed to tackle the menace of black money.

“Demonetisation was a technical device that does not impact the causes of generation of black economy, namely, the political or social aspects. It would do nothing to change the ethics of the elite who generate black money. They would continue to do so. It does not address the issue of accountability of the rulers, which is so crucial to check the growth of the black money,” Arun Kumar says in his assessment, while also being critical of the manner in which the media — which as a sector also suffered a blow by the economic exercise — indulged in shrill reportage about a serious subject, misleading the people.

Describing demonetisation as “one of the most important economic events in the country” over the last two decades, Arun Kumar asserts that the long-term impact of the exercise would be adverse. The book also highlights the lack of advance planning by the government, citing reasons of secrecy about the dramatic move, as a major lacuna in the lead-up to the decision.

The book also tries to mend the misconception that “black means cash” and warns that shortage of money in the economy was a serious matter which has seriously impacted the organised and unorganised sectors.

For the author, demonetisation is a “big failure” of an “ill-conceived policy” and one whose cost outweighs any perceived benefits in the near or distant future, akin to chopping off the nose to cure a cold.

In sum, the book serves as a ready primer which decodes the socio-economic impact of one of the biggest decisions of the National Democratic Alliance government, which is expected to show demonetisation as a key achievement in the next general election scheduled for 2019.