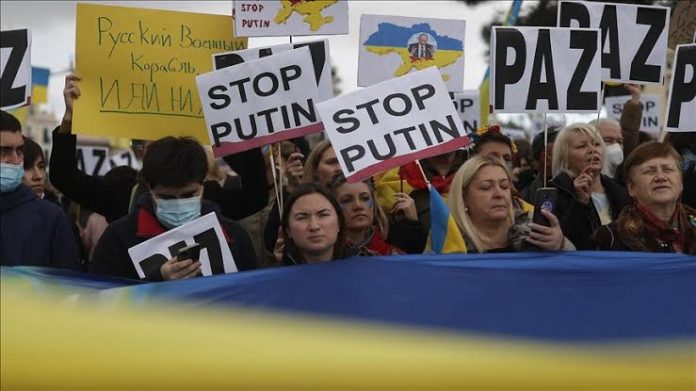 Gathering in Repubblica Square of Rome, Italy, some 5,000 people gathered together to show solidarity with Ukraine, hoisting the Ukrainian flag and chanting against Russian President Vladimir Putin.

Ukrainian citizen Nina said the protesters were there to put an end to the Russian aggression, saying she looked forward to having peace in her motherland where her family members and elders were living.

This is an attack against the whole of Europe, the peoples of Europe should protect this nation, said Samuele, an Italian student.

Tens of thousands of protesters in the Czech Republic met at capital Prague and protested the Russian attack on Ukraine; Prime Minister Petr Fiala gave a speech amid the protests, thanking the support for free and independent Ukraine. 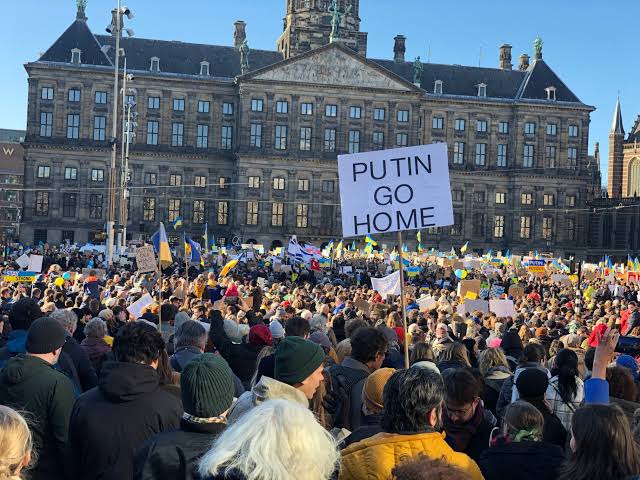 An Azerbaijani protester, Eldenzi Yusibov, said she rejected Russian intervention, adding: “We say no to war, stop to Putin.”

Ukrainians living in the Greek capital Athens also gathered in the Syntagma Square where the parliamentary building is located and chanted against the Russian president, also accusing Moscow of violating international law and human rights. The protesters dispersed following two hours of demonstration.

Spanish and Ukrainian people in Madrid gathered in Colon Square and carried banners calling Europe to rush to help Ukraine and saying Kyiv was not alone in its fight against Moscow.

Anti-war protesters in Germany were also active on Sunday as members of unions, churches and several NGOs held a demonstration in the capital Berlin.

Speakers at the protest condemned the Russian intervention in Ukraine and called on Moscow to stop attacks and withdraw from Ukraine, also urging the German government to keep doors open for Ukrainians fleeing conflict at home.

An association linked to the Turks in Crimea held protests in Beyazit Square of Istanbul with the participation of Crimean and Ukrainians who rallied against the Russian government and prayed for the Ukrainian people.

Celal Icten, head of the association’s Istanbul branch, said 2022 marked the eighth year of Russian occupation and violation of human rights in Crimea and accused the Russian administration of killing civilians and children.

He said the world should join forces for the sake of global peace and tranquillity and find a way to stop Russia.

Russian President Vladimir Putin announced a “special military operation” in Ukraine on Thursday, days after recognizing two separatist-held enclaves in eastern Ukraine. He claimed that Moscow had no plan to occupy its neighbor, but wanted to “demilitarize” and “denazify” Ukraine.

In response, Western powers have imposed financial sanctions on Moscow, and the EU has decided to fund arm supplies to Ukraine, close its airspace to Russian airlines, and ban Russian state media.

At least 368,000 Ukrainians have fled the country since the beginning of the attack, according to the UN Refugee Agency.– AA