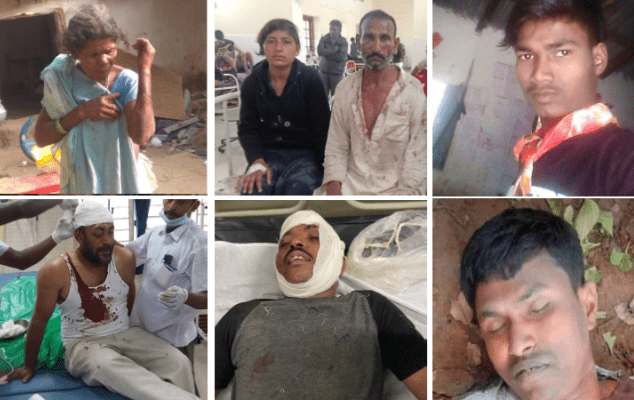 New Delhi:  Releasing half-yearly report on violence against  minority Christian community in India, the Religious Liberty Commission of  Evangelical Fellowship of India (EFIRLC) said it registered 135 cases of  lynching, community ostracization and concerted efforts to stop worship and gospel-sharing  in the first six momentous and eventful months of 2020.

The Evangelical Commission demanded that the center should enact a comprehensive national legislation against targeted and communal violence and enforce rule of law and arrest members of groups promoting sectarian hate, violence and involving in pre-orchestrated programs of levelling false accusations of conversions upon the Christian priests and missionaries.

It said targeted hate and violence against Christians in major states and the National Capital New Delhi has seen manifold increase despite Corona pandemic lockdown.

“The absolute sense of impunity generated in the administrative apparatus of India by the Corona pandemic lockdown, and the consequent absence of civil society on the streets and in the courts, has aggravated the environment of targeted hate and violence against Christians in major states and the National Capital territory.”

The report pointed out that accurate collection of data of the persecution of religious minorities was severely constrained due to the near collapse of the media and the inability of activists to go to distant villages because of the lockdown and restrictions on transport.

The 33-page Report titled “Hate and Targeted Violence Against Christians In India” stated that the situation has worsened as even in normal times, the police were loath to register cases while communally motivated crime is either unreported, or under reported.

Because of this, the victims have no recourse to the normal systems of reporting to the police, and severely restricted access to courts for relief, it added.

It said UP has the dubious distinction of topping the persecution scale with 32 cases of hate crimes while Tamil Nadu also witnessed the spurt in violence against Christians.

“Uttar Pradesh, ruled by the Bhatia Ajanta Party with Mr. Ajay Singh Bisht alias Yogi Adityanath, a religious abbot or head of the Gorakhnath sect’s main temple in the eponymous eastern city of Gorakhpur, has the dubious distinction of topping the persecution scale with 32 cases of hate crimes.”

The southern state of Tamil Nadu also made headlines with some very troubling and terrible cases of violence. The tribal states of Chhattisgarh and Jharkhand, where the governments changed with the defeat of the BJP in the elections in 2019, saw a renewed spurt of persecution with 24 and 10 cases on our records.

The most horrendous case of lynching and dismembering of the victim’s body was reported from Odisha’s Kenduguda village in Malkangiri district on 4 June, where a 14-year-old Christian boy was allegedly crushed to death with a stone by a group of people who then chopped the body into pieces and buried in several places. In the FIR, the police noted that the victim and his family including his father had adopted Christianity three years ago. Since then, a few of the villagers have been harassing them. Christians in this village have been facing many threats and are being continually harassed by religious fanatics, Pastor Kosha Mosaki said. “He was earlier attacked in February this year. I have made 4 complaints at the Malkangiri police Station regarding these attacks.”

The report also gives an account of custodial death of father and son in a police station in Tamil Nadu alleging RSS was behind it.

“The anti-Christian violence in Tamil Nadu, which reported a horrendous custodial torture and murder of two Christians of the Nadar community by policemen backing RSS elements in a rival community, is traced to caste supremacist attitudes in villages and their linkages with political elements.”

The state goes for elections soon. In most of the districts of the state, the police are recruited from the dominant castes, which are inimical to the Christian community and its pastors, a large number of whom are from marginalised castes and economically poor or less affluent sections of society, it underlined.

The Christian and Dalit communities have demanded a judicial enquiry by a High Court Judge into the police brutalisation of a small shopkeeper, Jeyaraj (59), and his son Emmanuel Benicks (31). The father and son were arrested on 19 June after they allegedly had an altercation with the Sathankulam town police in the Tuticorin district. They had been beaten, brutally tortured, sodomised with rods. Magistrate P Saravanan supported the police which continued to torture till the two collapsed. They were at last taken to hospital on July 22 on the verge of death. Benicks died at Kovilpatti Government Hospital on the night of June 22, Jeyaraj died the next morning at the same hospital. Jeyaraj was accused of keeping his shop open beyond the Covid curfew hours and his son was arrested when he tried to protect his father from the blows of the police.

In Chhattisgarh, now at number three from its earlier sixth position, the rise is attributed to Christians more willing to report violence in the Bastar region where there had been so far a blanket of fear of both underground militant Maoist forces and the armoured police. The state saw six documented cases of targeted violence against Christians just in April 2020 despite the national lockdown being in place.  Christians were summoned to village meetings when they refused to participate in religious rituals that violate their conscience. They were pressurised to recant and assaulted when they refused.

Jharkhand, which had seen two cases of lynching of Christians in 2018 during the rash of similar cases against Muslims by cow vigilantes, saw four major assault cases in May alone. Though no one was killed, women were molested. On May 25, local authorities had banned Christians in Pundiguttu village from getting rations from the government outlet. In Jharkhand too there were cases of Christians were being socially ostracized. The Pundiguttu village panchayat in May ordered the Christian converts to convert to the majority faith at pain of being denied water from the community well and other penalties.

The report noted that the numbers of cases recorded by the Evangelical Fellowship of India network and other Christian groups are only indicative, and the actual numbers may be much larger. The reasons for underreporting are fear among the Christian community, a lack of legal literacy and the reluctance/refusal of police to register cases.

It alleged that the police have been very reluctant and slow to register FIRs in these cases involving cognizable offences despite being duty-bound to do so under Section 154 of the Code of Criminal Procedure. Even in the cases registered with the police, most never come to court.

The consummately organized hate campaign against the Muslim population, beginning mid- December 2019, and erupting in mid-February2020 in the North eastern suburbs of the Indian capital city New Delhi has raised structural questions on the security of all religious minorities in the country, especially in extraordinary situations of social isolation as under the Covid curfew, with the Christian community questioning how safe they are if the Muslims are so brutally targeted by religious political fanatics structured in seemingly well organised formations on the social media application called WhatsApp, which has a reach of 400 million members in the country.

This has been admitted in the charge-sheet present in court by the Delhi police in June, in which it records that groups of young men in East Delhi district were martialled and directed by their handlers to kill members of the minority community.

[In the violence that was unleashed in Delhi, at least 43 Muslims and 10 Hindus were killed. Nine mosques were burnt to the ground, as were academic institutions and the small shops that were the economic stay of the Muslims. Thousands were homeless. Front-line lieutenants of the ruling Bhartiya Janata Party called upon their followers to shoot them, a thinly veiled targeting of Muslims and activists protesting the Citizenship Amendment Act (CAA) passed by the government. The violence raged for several days as the police watched and the political apparatus seemed paralysed.]

The report warned that there have been many other indications from the government and the ruling party (BJP) of changes in laws and many policies which will impact the Christian community together with other marginalised groups in many ways. There is also a renewed demand for all-India law against conversions from the Hindu faith.

It also noted with concern about the attitude of UP state law commission which used cover page graphic from the rightwing Hindu Janajagruti Samiti’s website.

“We are, in particular, disturbed by the Uttar Pradesh state Law Commission, in November 2019, drafting a controversial report recommending heavy penalties of up to seven years in prison to persons deemed to be violating a proposed new law against conversions. The cover page graphic and illustrations of the 268 paged report are taken from www.hindujagruiti.org, the website of Hindu Janajagruti Samiti, whose explicit goal is to establish a Hindu Rashtra.”

EFIRLC appeals to the Government of India and the respective State Governments of the States named in the report to ensure the rule of law and the security of religious minorities in India.

Rev. Vijayesh Lal, National Director of EFIRLC, said UP and TN government should deal stringently with the various right-wing organizations operating in these states whose primary agenda is to create an atmosphere of fear among the Christian community and other religious minorities.

The report also made several recommendations including police reforms and sensitization programs for the police officials regarding laws on religious freedom and human rights. It also urged the center to amend paragraph 3 of the Constitution (Scheduled Castes) Order 1950 to include Christians and Muslims.

761 cases of violence against Christians in India in 2021: Report