Muslim Mirror
Home Muslim World Did US ever had a ‘regard’ for Afghan lives? Isn’t Kabul and...
Facebook
Twitter
WhatsApp
Email
Telegram 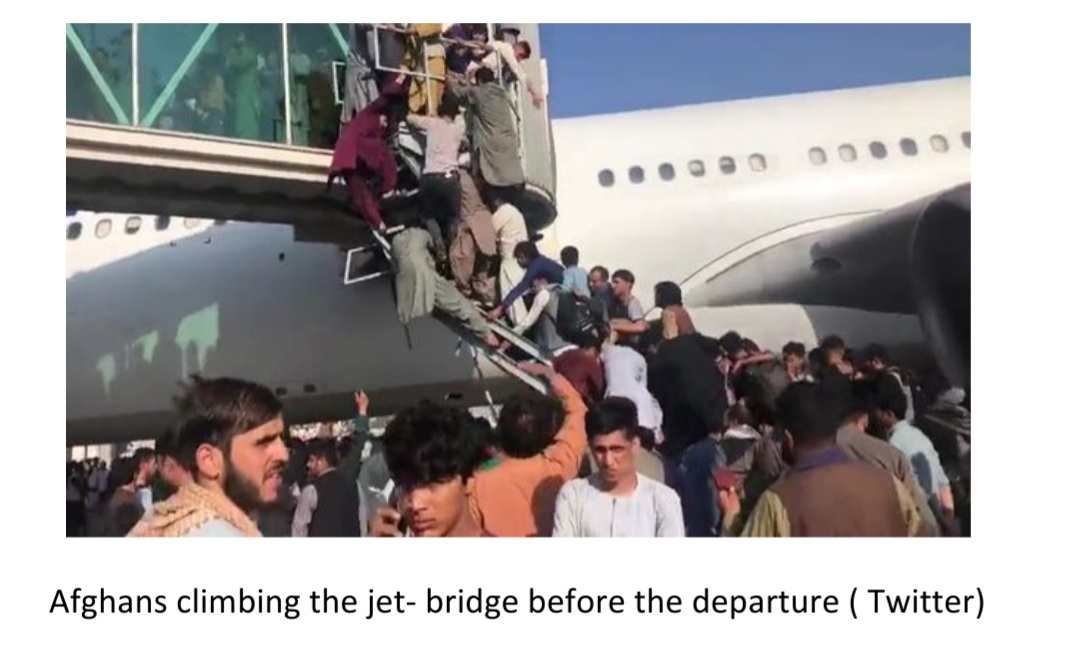 If shamelessness was to have any other synonym it was to be used for US. How US used Afghans for its ends, deploying them as spies, foot soldiers, translators, employees and labourers, in the last 20 years of its presence in Afghanistan, and the way it has now disowned them, is what has been witnessed on the Kabul airport, on August 16. Hundreds of Afghans, who have worked for US, on smaller and bigger levels, just clunged to US Air force C-17 plane which was heading for Qatar.Ordinary and hapless Afghans can be seen desperately ‘holding’ to aero plane in a bid to reach US! This C-17 plane was primarily to evacuate US army persons. This also happened due to wide spread rumors that foreign countries were evacuating people without visas.

What a paltry site of human failure. In India we witness thousands sitting on top of trains, but never on the aero plane and as if this was not enough, many Afghans were thrown out of it to meet to their ever waiting death. 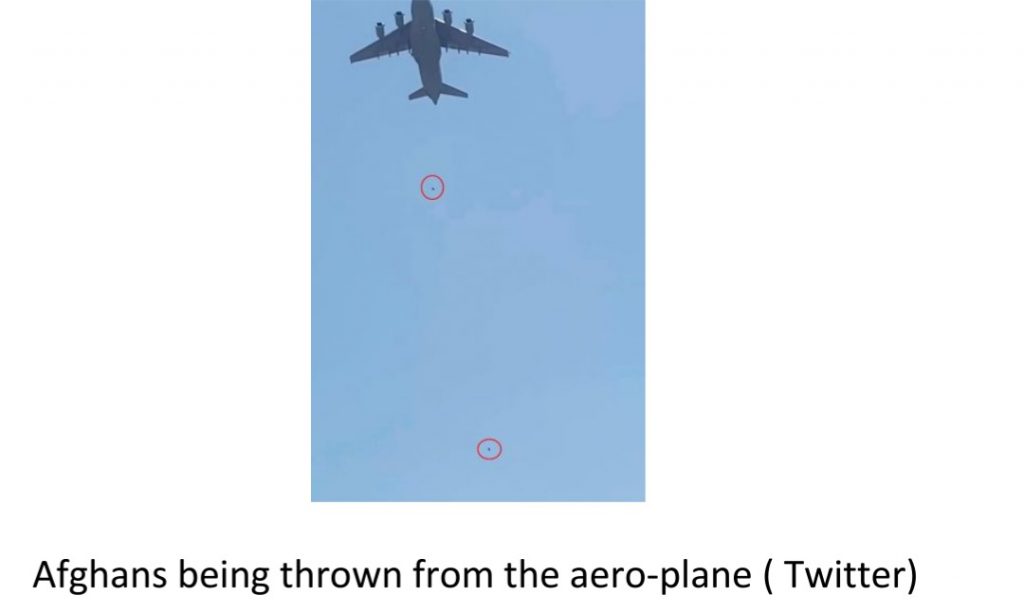 Can anyone question as to who is responsible for this ghoulish scene? Who was assigned for the Kabul airport security? If not the US forces! Wasn’t it so fancifully declared that US was to enhance its security presence at the Kabul airport by 6000 personnel.

According to Wall Street Journal, three persons were also shot dead as their bodies were found lying on the ground near the airport side entrance. Who killed them? Obviously the US security forces. ‘An American official said earlier that troops had fired in the air to deter people trying to force their way onto a military flight that was set to take US diplomats and embassy staff out of the fallen city’, informed mirror.co.uk. There are still a lot many British citizens stranded in Afghanistan who would need evacuation.

The situation of people just barely trying to ‘hold-up’ to the moving US Air Force C-17 before its take-off is perhaps the worst ever downgrade of humanity. Never has such a desperation happened anywhere in the world. Those who fell from the air were to fall on roof tops of houses near airport. This is the abysmal regard the US has for the lives of Afghans and Muslims at large! US, after all had come to ‘build and rebuild’ Afghanistan in the last two decades! Does the world has the right to ask US if it entered Afghanistan for this dreadful day? The entire Europe and NATO allies are putting US to question as to why were ‘they’ bludgeoned for such a result-less war of 20 years? The world is screaming as to what US ignominy has brought to it, as innumerable wealth of dollars and deaths have all gone wasted. There are reports that such scenes are almost around all flights of other nations too.

It is worthy here a mention a snippet from Chinese twitter of Shen Shiewei, who reminisced as to how similar scenes were underway when US was fleeing after the Vietnam war in 1975. He shared a picture in which shows ‘An American punch(ing) a Vietnamese man in the face as he tries to close doorway of an airplane overloaded with refugees seeking to flee Nha Trang, which was being taken over by North Vietnam in 1975’. Nothing seem to have changed much, albeit with far more horrible scenes witnessed from Kabul in comparison to what had taken place at the fall of Saigon in 1975. 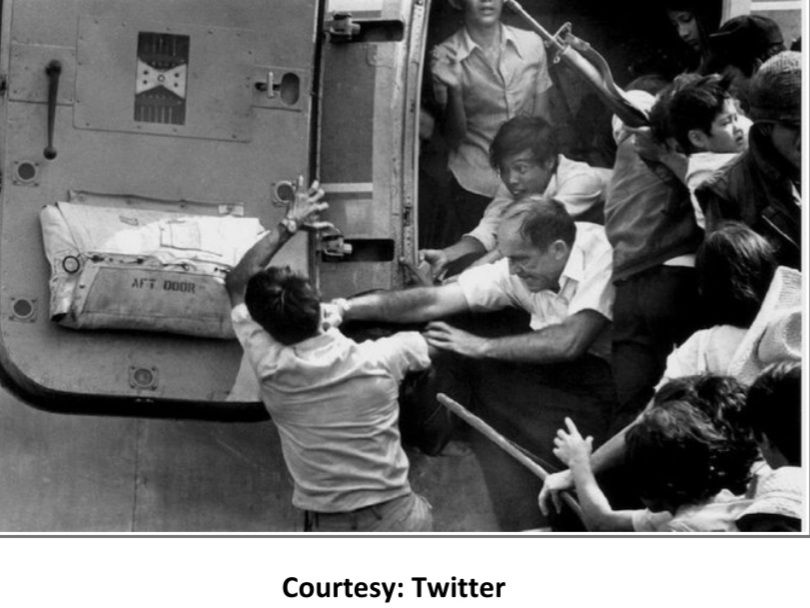 In the wake up of this discarding performance of US around Kabul airport, imagine if Badri Force, the specially trained commandos of Afghan-Taliban, were not to take control of Kabul security? The worst ever ‘free-for-all’ was to have taken place. It was only the Kabul airport where US was responsible and it is for the world to see the chaos it created. Now take a probability, if US army men may have died instead? All hell was to have got broken by now. Perhaps, US army ought to be tried in the international court of justice for its gross negligence and the incapability of this magnitude.

It may be mentioned that as a policy US and England too, had declared that it would air-lift its ‘loyal’ Afghans and this made many Afghans day-dream for the US ticket. In every possibility US is solely to blame for this mad stampede and the deaths it ensued. US spent millions of dollars towards its propaganda machinery towards the paranoia against AT, in all these last two decades, that life under AT would be impossible to live. It may now be possible that AT may arrest the US army personnel who have done this extreme dereliction in their duty, in context, to at least those who have been shot dead by US army. What happened at Kabul airport in fact is the crux of the entire failure of US occupation of Afghanistan for the last 20 years and nothing short of it. No wonder Kabul and Saigon have become synonymous!

Meanwhile, it is very likely that Russian ambassador to Kabul is to meet Mulla Adbul Ghani Baradar and soon Russia may accept AT government. This may be followed by China. China has already lent its support to AT in exchange for a peaceful Afghanistan and China may be extending its Belt and Road Initiative through Afghanistan. It is interesting that AT have not arrested those militias who were with Ashraf Ghani government but have hold captive members of ISIS and also Tehreek-e-Taliban Pakistan which AT consider as foes. There are also reports, from Russian media, that Ghani fled with four-cars and a helicopter filled with cash. His flight could not land in Tajikistan, due to Russian pressure, and finally he landed in Oman.

What fate holds for Afghanistan is what time would tell, but the ignominious role US could put on August 16 will last forever as it became clear that US never cared a fig for the lives of Afghans and has only added yet another chapter to its inglorious imperialistic past, in which it killed more than 2 million Afghans, and yet had to retreat and negotiate, across the table, with the same people against whom it waged a war. Nothing more shameless it could ever be.

***
The writer is a former UP State Information Commissioner and a political analyst.