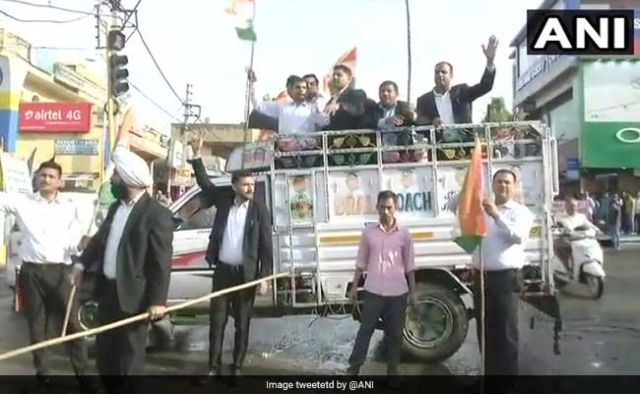 New Delhi : The Jammu & Kashmir High Court Bar Association on Wednesday told the Supreme Court that it has not obstructed police from filing charge sheet in the Kathua minor rape and murder case.

Filing an affidavit before the apex court, the Association vehemently denied that its President, senior advocate B.S. Salathia, and other office bearers threatened a woman lawyer from appearing for the family of a rape victim, terming the allegation as “false and baseless”.

The affidavit stated: “So far as the issue of causing any obstruction or extending any threat to advocate Deepika Singh Rajawat (victim’s lawyer) from appearing in the High Court on behalf of the victim in the alleged Rassana rape and murder (Kathua) case by the office bearers or any other member of the Association is concerned, it is totally false and baseless and the same is vehemently/specifically denied.”

Rajawat had complaint that Association members had threatened her not to appear for the victim’s family but the Association claimed that her statements in this regard were “contradictory”.

“She alleged a threat on April 4, 2018 whereas in media, the alleged threat is on April 11, 2018. The statement is itself contradictory and misleading. It is further submitted that the office bearers of the Association including the President have been requesting the members of the Bar to respect and abide by the resolution of general house meeting but never obstructed from causing appearance in any case,” the affidavit stated.

The top court had earlier pulled up Jammu lawyers for obstructing the filing of charge sheet in the case even as they claimed they were protesting on a different issue.

The Association said it was protesting against growing illegal presence of Rohingyas and Bangladeshi nationals in Jammu and also demanding a Central Bureau of Investigation (CBI) probe into the Kathua rape-cum-murder, but it was was wrongly being portrayed as “communal”.

It claimed its demand for CBI probe was done “in order to ensure that the victim gets justice and the said demand was never to support the alleged rapists”, adding, now the same demand has been dropped, even though it still believes that the justice shall be done to the victim only after a fair and impartial probe by the CBI.

The Association criticised the national media claiming that they were unfairly projected as sympathising with the rapists.

“A motivated and malicious campaign by some national media channels created an erroneous impression about the motives of the bandh call in Jammu by projecting the legal fraternity and also the people supporting bandh as pro=rapists which is factually incorrect and misleading as such denied,” it added.

On April 13, the apex court took suo motu notice of an incident of lawyers of Jammu and Kathua bar associations preventing the victim’s lawyer from appearing in the case.

In January, an eight-year-old girl went missing while grazing horses in Rassana forest in Jammu and Kashmir’s Kathua district. A week later, her body was recovered.