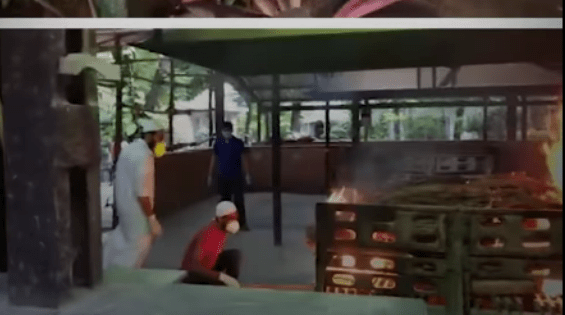 Mumbai : One of the silver linings of Covid – 19 is that it has brought out humanity in some people.

People have been gripped by the fear of Covid-19 to the extent that they hesitate to perform the rituals for their dead relatives. Amidst the fear and uncertainty, the staff of a Muslim burial ground, Bada Qabrastan in Marine Lines has helped cremate over 250 bodies in the past 3 months free of charge.

Moreover, they have been providing transportation for the funeral as well as to those who need to be taken to the hospital. In most cases the hospital informs them of unclaimed bodies while some families directly avail their services. Initially, the management tried to avail private ambulance services but were refused. Taking matters into their own hands, they fixed 6 abandoned ambulances on the outskirts of the city and towed them back to the city.

Ten teams were formed and were assigned to Chandanwadi, Shivaji Park, Reay Road, Oshiwara and Aarey Milk Colony crematorium. Scientifically, droplets from a cadaver could transmit SARS COV-2 but the chances of survival are very less. Proper precautions taken during burial can reduce the risk, yet people don’t want to be involved.

Following the instructions of police and hospitals the staff take the body to crematoriums and ensure the rituals are complete till the end. They don’t charge a fee although some families do offer. Money is a rising problem as the workload increases as well as the physical and mental exhaustion experienced by the team.

However, despite the challenges not one single member has quit and have been working selflessly. The times are difficult for everyone regardless of caste, creed or religion and it is more important than ever to be kind to each other in such a crisis