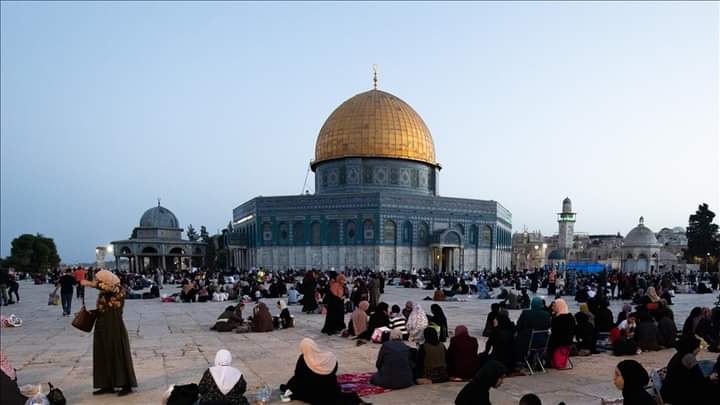 The director of East Jerusalem’s Al-Aqsa Mosque appealed via loudspeakers for help from the Islamic world amid Israeli police incursion into the holy site.

“Extremist Jews will not enter Haram al-Sharif (the main building of Al-Aqsa) before trampling on our bodies,” he stressed.

Stating that the Israeli police violated the sanctity of Haram al-Sharif, he addressed the Islamic world, “Where is your honor?”

Israeli police on Monday stormed the Al-Aqsa Mosque in occupied East Jerusalem and attacked the Palestinians who were on guard to prevent raids by extremist Jews.

Medical sources told Anadolu Agency that hundreds of people were injured during the Israeli incursion and 50 of them were taken to hospitals.

Extremist Jews decided to storm Al-Aqsa Mosque to celebrate the anniversary of the Six-Day War in 1967, when Israel occupied East Jerusalem, as “Jerusalem Day” according to the Hebrew calendar.

Extremist Jewish organizations had called for raids on Al-Aqsa Mosque on Sunday and Monday to mark the day.