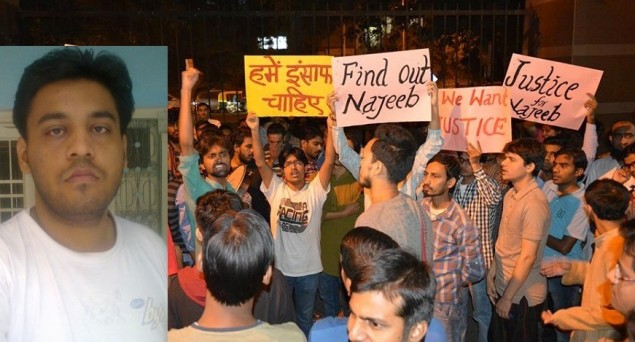 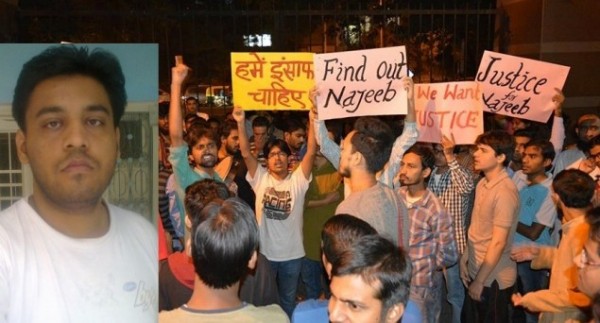 New Delhi:  There are conflicting reports  about  the ‘missing’ of  Najeeb Ahmad, a Bio-technology post-graduate student of Jawaharlal Nehru University who just 15-days ago joined the University.  A native of Badaun in UP,  Najeeb was last seen on Saturday morning.  He  “ mysteriously”   disappeared a day after an alleged brawl between him and some members of ABVP, a student wing affiliated with the ruling Bharatiya Janata Party.  The JNU Students Union said in a statement on Monday, that the alleged scuffle took place around mid nighton Friday. His mother also came here to find out what happened with him as she got  frantic  phone calls on Friday night from him.

“Some three students went to the room of Najeeb Ahmed, MSc Biotechnology (first year), Room No 106, Mahi Hostel to campaign for hostel elections. At this time, there was an alleged scuffle which took place between Najeeb and the others. Hearing noise and commotion, when the residents of Mahi reached Room no 106, they witnessed three students assaulting Najeeb. At this juncture, the residents seeing a group of students hauling and coming towards Room No 106, for security concerns, locked Najeeb in his room. The G4S security personnel have upon reaching the hostel opened the door. Despite the presence of security personnel, some 10-15 students brutally attacked Najeeb. After the attack, the residents again locked Najeeb in the washroom and blocked the entrance, waiting for the Hostel warden to reach. As the senior warden, Dr Sushil Kumar reached the place, they started moving to the Warden’s office in the ground floor. Despite the presence of the senior warden and G4S security Najeeb was criminally intimidated and communally targeted by the same group of students on the way to the warden’s office. The JNUSU President and other hostel residents who had come to stop the attack were also assaulted by the same 10-15 group of students”.

The student body has also alleged that Najeeb was threatened even in the presence of varsity officials.

“In the Warden’s office, in front of the Senior Warden Dr Sushil Kumar, and the other Wardens Dr Somyajit Ray and Dr Arun Srivastava, these group of lumpens threatened Najeeb Ahmed for his life and limb. They repeatedly told the warden not to initiate any proceedings and leave Najeeb to them and then they would not spare him. They also hurled patriarchal and communal abuses at Najeeb in the presence of the wardens. Despite being present at the site all along the G4S did not collect any video evidence of the assault and the Warden failed to intervene to stop the assaulting students,” said JNUSU.

On Sunday evening, students held a protest and asked the university administration to trace his whereabouts and to ensure his safety.

Meanwhile, on the complaint of Najeeb’s mother a case of abduction was registered at Vasant Kunj (North) police stationon Sunday. Police registered the case under section 365 (kidnapping with intent secretly and wrongfully to confine person) of IPC.

However, the JUN administration has contradicted the JNUSU’s version saying Najeeb was an accused in the alleged scuffle. In a statement, it said:

“Wardens of the hostel met and discussed all the issues related to the incidence with the students present, including the hostel president, JNUSU president and room-mate of the accused. The matter was resolved that night and decision was taken on disciplinary measures. JNUSU along with some student representatives met with Rector-I and DOS at Recotor-I office on 16 October, 2016 and discussed the incidence. The students were assured of a speedy inquiry. In the meantime the accused student’s parents lodged a police complaint saying their son was missing from the hostel…”.

“The JNU security was instructed to immediately look for the missing student. The DOS gave a written instruction to all the wardens to search hostel rooms. The police visited the campus and investigated the matter. The administration is in constant touch with the police to facilitate the investigation,” said the university.

Najeeb’s mother, who came all the way from Badaun after a frantic phone call from her son on Friday night to see her son.

Please bring my son back…where is my son? What has happened to him? Please give him back to me,” wept Najeeb’s mother.