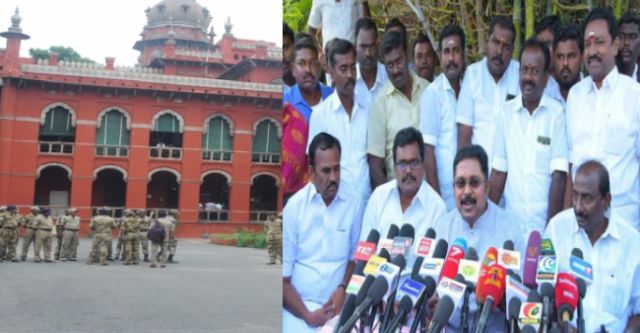 With this, the ban on holding of by-polls for the 18 seats was lifted.

The disqualified legislators are with sidelined party leader T.T.V. Dhinakaran, now an Independent legislator in the Tamil Nadu Assembly.

Reacting to the judgement, Dhinakaran told reporters: “We will discuss with the 18 legislators and decide on the future course of action.” He said it was “an experience for us”.

“If the 18 disqualified legislators decide to go on appeal against the decision then we will go for an appeal,” Dhinakaran said.

The apex court had appointed Sathyanarayanan, replacing Justice Vimala who was originally appointed by the high court as the third judge following a split verdict in the case in June.

While Chief Justice Indrani Banerjee, heading the two-judge bench, declined to interfere with Dhanapal’s decision taken in September 2017, Justice M. Sundar set aside the Speaker’s order on the ground that it was hit by “perversity, non-compliance with the principles of natural justice, mala fides and a violation of the constitutional mandate”.

The judges said since there was disagreement between them, the case should be transferred to a third judge.

Maintaining the status quo, the court also said till the case was finally decided the interim order issued earlier that barred holding of by-elections and the floor test in the Assembly would continue.

In the 296-page judgement, Justice Banerjee said that in her opinion the view taken by the Speaker was possible, if not plausible, and “I am unable to hold that the said decision is any way unreasonable, irrational or perverse”.

“It is well-settled that when two views are possible, the High Court does not in exercise of its power of judicial review conferred under Article 226 of the Constitution of India interfere with the decision just because it prefers the other view.

“No interference is, therefore, warranted with the impugned order passed by the Speaker,” she said, dismissing the petitions by the disqualified MLAs.

In his order differing with the Chief Justice, Justice Sundar said: “sum totality of discussion leads this court to inevitably conclude that the impugned order of the Speaker disqualifying 18 writ petitioners herein deserves to be set aside.”

In case the court had upheld the disqualification, then there would have been by-elections in 18 constituencies, exposing the ruling party to vulnerabilities of electoral politics.

On other hand, if the court had quashed the Speaker’s disqualification order, the government may have to face an opposition-sponsored no-confidence motion, which it would find difficult to survive.

In the 235-member Assembly, the AIADMK has 115 members followed by the DMK with 88, Congress eight, one of the IUML, one Independent, the Speaker and 20 vacant seats (18 disqualified and two dead). Besides, there is a nominated member.

Three legislators though belonging to three different parties won their seats under the AIADMK’s two leaves symbol. Of that, one legislator Karunas is openly supporting Dhinakaran.

The case pertains from the time when O. Panneerselvam (now Deputy Chief Minister) had rebelled against the party led by jailed leader V.K. Sasikala.

Later, he merged his group with the faction led by Chief Minister K. Palaniswami, who sidelined Sasikala and her nephew Dinakaran.

In 2017, a group of 19 lawmakers met then Governor C.Vidyasagar Rao and gave a memorandum expressing loss of confidence in Palaniswami and requested him to appoint a new Chief Minister.

The Speaker then issued notice to the lawmakers asking them why they should not be disqualified under the anti-defection law.

Subsequently, one of legislators, S.T.K. Jakkaiyan, switched over to the Palaniswami side and the others were disqualified.