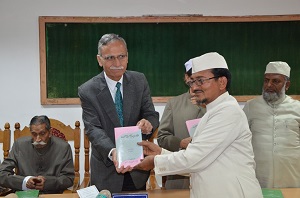 Does Aligarh Muslim University (AMU), Aligarh require a Vice Chancellor? This is a valid question must arise in minds of AMU fraternity residing in Aligarh and across the globe as the Vice Chancellor of the prestigious university is referred as ‘Janasheen’ (successor) of great Sir Syed Ahmad Khan. Unfortunately in the recent time the ‘Janasheens’ (successors) of Sir Syed Ahmad Khan faced wrath from the governing body of students AMU Students Union (AMUSU), AMU Teachers Association (AMUTA), anti-university elements and many others. In fact, by targeting the current and previous vice chancellors, some sections have maligned the status of prestigious Aligarh Muslim University. Media too have given coverage to such unfortunate incidents and differences between the Vice Chancellor and groups functioning inside the university.

The same media which hardly raises the issues like negligible grant from University Grant Commission for the Jawaharalal Nehru Medical College (JNMCH) and other faculties in AMU has given full coverage to unrest whenever happened in the campus. As an AMU alumnus like many others I feel ashamed while going through such reports in newspapers or television channels. Continuing its old trend, the media is doing same for the current Vice Chancellor Lt. Gen (Retd.) Zameeruddin Shah, who is facing heat with many allegations within one year after taking charge in May 2012. Thanks to elected students’ body AMUSU and its post holders for targeting Vice Chancellor with various statements in newspapers and internal circular within the university. Lt. Shah is now referred as “Agent of Congress” by AMUSU and its associated wings and giving derogatory remarks against the Vice Chancellor.

After assuming office on 12th May 2012, Lt. Gen (Retd) Zameeruddin Shah was warmly welcomed by students and teachers along with many groups as the Vice Chancellor of the university. With a successful career record in army, Lt. Shah was highly optimistic and confident for a different inning as a Vice Chancellor of AMU. In his inaugural speeches during welcome ceremonies organised by different groups Lt. Shah made it clear that he had accepted the post of Vice Chancellor with certain goals in his mind and he is confident to achieve the same.

Initial months remained somehow good for Lt. Shah as AMU VC and it can be termed as “honeymoon period” in corporate terms. The students, faculties and non-teaching staff appreciated the approach and modus operandi of Lt. Shah. But, all praise for Lt. Shah ended in short period and anti-VC voices started rising from different corners of the university and outside as well. Life at AMU has been far from normal for the past two to three months. Be it the admission related issues or 75% attendance related issue or the suspension of students including AMUSU post-holders, the Vice Chancellor of AMU had to face the agitations and wide criticism. The agitation became violent past month since some miscreants attacked the car of Vice Chancellor. At least three incidents of firing have taken place in recent months.

AMUSU since its formation is not happy with Vice Chancellor and issued many statements against him including the unpleasant ‘Congress Agent’ remark after (AMUSU) president Shahzad Alam was suspended by the administration. This is the third suspension of an AMU student in recent weeks. Earlier, Hammad Nabi, former secretary of AMUSU and a student of MSW, was suspended from university rolls for five academic sessions on March 30. The administration had cited gross misconduct and indiscipline as the reason for his suspension. On March 12, Taushif Alam, vice-president of AMUSU, was suspended after he had allegedly occupied the office of the principal of J N Medical College on the campus. The suspension was revoked by the AMU administration after students sat on a hunger strike.

Lt. Shah is blamed for delaying the DPR (Detailed Project Report) / DFR (Detailed Feasibility Report) preparation for proposed Centre in Kishanganj, Bihar. He had clearly explained the MHRD that the university is not having designated (separate) fund for AMU Kishanganj. The DPR preparation needs at least Rs. 30 lakh, the Minister of HRD Pallam Raju in a written reply on March 7, 2013 had assured to release the fund for AMU Kishanganj. However, till date the amount is not released to AMU for preparation of DPR. Meanwhile, the AMU Vice Chancellor along with team comprising of Officer of Special Duty (OSD) for AMU Centres have paid a visit to Kishanganj to inspect the land in last week of March. His visit to Kishanganj is also being criticised by some sections and all blame for delay in DPR preparation is put on him although the facts signal it towards the MHRD and Congress led UPA government.

Now, coming back to point. Where is AMU heading? Does the university and its students, teaching and non-teaching staff, administration fulfilling the mission and vision of Sir Syed Ahmad Khan? Sadly, I will say a Big No. A big shame on AMU fraternity as we are making mockery of our alma mater before the world due to differences between the students and administration. The sole of Sir Syed Ahmad Khan must be panic over the differences among the students, teachers, non-teaching staff, administration and others associated with the university.

What is happening at AMU in short tenure of Lt. Shah is not for the first time, the recent past and tenures of other vice chancellors have witnessed more or less similar situation. Apart from Mohammad Hamid Ansari, currently Vice President of India the tenures of other Vice Chancellors who have served the university in past two decades were full of controversies and unfortunate incidents. AMU had witnessed a change of air since Mahmoodur Rahman, a retired IAS assumed office in May 1995. Rahman tried to free the university from alleged ‘goon culture’ and making the university campus a hub of academic activities. His five years would be worst nightmare for him as hardly any section supported him during his tenure although he had cleaned up the university from ‘kutta culture’, illegal occupancy in hostels, etc. Sine-die and Rahman became synonymous with each other and he left the university with negative feedbacks. Mohammad Hamid Ansari joined on May 2000 and served the university for only 22 months as vice chancellor and he could complete his tenure with satisfaction due to his diplomatic background. Naseem Ahmad, a retired IAS took the charge as VC in May 2002 and he too completed his tenure with lots of controversies along with witnessing several agitations.

Further in June 2007, Prof P.K. Abdul Azis, formerly Vice Chancellor in Cochin University of Science & Technology became the hated person for students, AMUSU and AMUTA in many issues especially the proposal of establishing the centres of AMU outside Aligarh. The anti-Azis movements in AMU crossed all the limits and even his good moves were severely criticized by his opponents. Azis was slapped with financial irregularities charges and the Centre had set-up CBI inquiry against him for a meager amount of 1.75 lak to 2 lakh, which was spent for guests visiting the university. Authentic sources have mentioned that Azis had to face the heat as he didn’t bow down before all the suggestions or orders of the ministry of HRD. With a long list of allegations and controversies, Azis bid adieu of AMU in January 2012. Although he had made the university completely tech-friendly, the infrastructure of the university schools and other faculties including Central library were uplifted and he has also take the historic step to take AMU outside the boundaries of Aligarh, but only a small section praised his valuable contribution for the university.

More or less with the points mentioned above the Vice Chancellors of AMU in the past two decades have left the university with a series of controversies. Most importantly, be it AMUSU, AMUTA or related bodies all have remained unsatisfied with the work of modus operandi of the vice chancellors in past and current VC Lt. Shah. What conclusion we should draw from the above mentioned point? Either the VC is wrong or the opposing bodies is wrong. Does AMU require a VC or not? Playing the blame-game is not going to help Aligarh Muslim University established by Sir Syed Ahmad Khan. As an AMU alumnus I sincerely request the Vice Chancellor, AMUSU, AMUTA and other bodies functioning inside the university, must find out a solution of the issues. Making the issues of AMU a national headline is not going to serve the purpose of Aligarh Muslim University and its lakhs of alumni residing across the globe. In fact, this is a big-shame on us that we are playing with our own ‘Chaman’ as devilish ‘Bulbul’.

The author is an AMU alumni based in Delhi