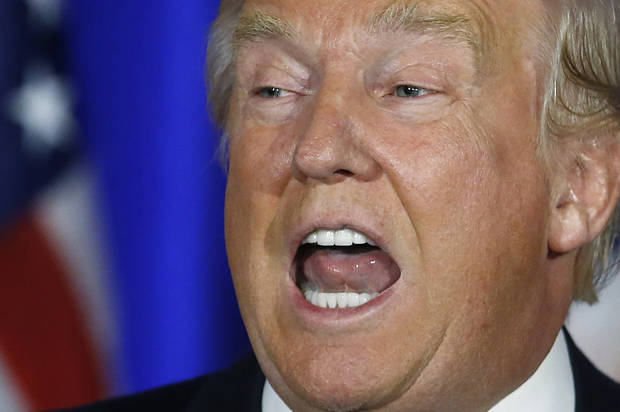 The first words that Donald Trump uttered after he walked up to the podium to accept the nomination for President were, “Friends, delegates and fellow Americans, I humbly and gratefully accept your nomination for the presidency of the United States.”

From that point forward, for the next one hour and fifteen minutes, Trump threw humility to the wind as he painted a dark portrait of national and international gloom and doom in which he and he “alone” was the solution to all of the potentially catastrophic and calamitous problems he described. Given

Trump’s repeated use of the word “I” throughout the speech, its subtitle could have been, “It’s All About Me.”

The most memorable “I” line from the speech came when Trump proclaimed, “I am your voice.” This calls into question: whose voice is Trump representing, what is that voice saying, and what does it mean for the future of America?

Whose voice is Trump? There is a two-part answer to that question.

First, he is speaking primarily for and to his current “base” and potential supporters — primarily white middle and working class males — who feel disenfranchised and disadvantaged by the current political system and process and who also have a great deal of anger about their current status and toward those who have “exploited” them.

The 2015 American Values Survey done by the Public Religion Research Institute (PPRI) conducted before the Republican primaries showed that:

Second, Trump is speaking for himself. And, given his target audience — in spite of what he said in his acceptance speech and numerous times before that — he is doing so in a “politically correct” manner. We made this point in a blog at the end of 2015 before the Republican primaries in which we wrote:

Trump is correct that he is not being politically correct in his pronouncements — at least in the conventional sense of that term.

He is being completely politically correct, however, in speaking to those whom he has targeted as the audience for his Trump-isms. He is doing and saying absolutely the “right thing” to connect directly to his espoused supporters.

Merriam Webster defines “politically correct” as “agreeing with the idea that people should be careful not to use language or behave in a way that could offend a particular group of people.”

In this instance, the obverse obtains, the politically correct thing to do is to offend particular groups (e.g., race, religion, sex) in order to appeal to another particular group (i.e., a desired voting segment).Trump has been weaving a negative narrative to capture dominant market share in the campaign for the Republican presidential nomination.

Bill Clinton’s narrative in the 1992 race for President was “It’s the economy, stupid.” Barack Obama’s narrative in his 2008 campaign was “hope and change.” Donald Trump’s narrative is “fear and loathing.”

The Republican primaries are over. Donald Trump was the clear and convincing winner. And now, as the Republican nominee for president, he is declaring that he is the voice of the American people.

If that is true, what is that voice saying? According to Trump, in his acceptance speech at the convention, here are a few of the things that voice has to say:

“Our convention occurs at a moment of crisis for our nation. The attacks on our police and the terrorism in our cities threaten our very way of life.”

“Not only have our citizens endured domestic disaster, but they have lived through one international humiliation after another. One after another.”

“Americanism, not globalism will be our credo.”

While he was not poetic or inspiring in speaking at the convention in his version of the voice of the American people, Donald Trump has been much less artful and tactful in offering his comments as that voice in the past. As examples, consider the following:

“Donald J. Trump is calling for a total and complete shutdown of Muslims entering the United States.”

“He’s not a war hero. He’s a war hero because he was captured. I like people who weren’t captured.”

“I think apologizing’s a great thing, but you have to be wrong. I will absolutely apologize, sometime in the hopefully distant future, if I’m ever wrong.”

Trump’s “American” voice at the convention was definitely a toned-down version of his primary campaign voice. Nonetheless, even though the messages were somewhat softer and added to a little to

try to appeal to Sanders Democratic voters, Trump’s strident and hectoring presentation of them bespoke the truth. The key messages remain the same and so does the messenger.

Given this, what do Trump’s pre-and post convention pronouncements as the voice of the American people portend for the future of America? To borrow and modify a phrase, “They are full of sound and fury, signifying nothing and at the same time signifying something.”

The nothing that it speaks is that, if Trump were to be elected, he would be completely unable to deliver on many of the boldest promises that he has made both before and at the convention.

This is so because Trump appears to be clueless about what he will be able to do as president. Or perhaps, he is just being inauthentic in an attempt to close “the deal”.

Whichever it is, the wall, forget about it. Mark our words.

Add to that forget it list: Liberating our citizens from crime and terrorism and lawlessness in their communities; bringing jobs back and stopping companies from moving offshore; putting those steelworkers and miners back to work; and, renegotiating all those horrible trade agreements.

That’s not to say that there is not a need to address these issues and other problems that Trump has highlighted. That’s the something in his bluster that is signified and warranted. Trump has tapped into a populist sentiment (as did Sanders on the Democratic side) and has ridden that one trick pony to the top of the Republican ticket.

The PPRI American Values Survey discloses that: an astounding 72 percent of Americans believe the country is still in a recession; 79 percent feel that the economic system unfairly favors the wealthy; and, 84 percent of Americans agree that business corporations do not share enough of the success with their employees.

There is a shared economic angst. On the other hand, the survey reveals great divides on issues by party affiliation, religious affiliation, and race.

In conclusion, is Donald Trump the voice of the American people? Absolutely not — as we suggested at the outset of this blog, he is the bullhorn for a segment of those people. But, he is not the voice for those people nor is he the voice of America.

The voice of America is our American voices. Those voices will express themselves in the presidential election year just as Donald Trump has expressed himself. He has given himself the label of being the

The label that we would give him is as the “ultimate divider” in a country that is already far too divided. As we said in a recent blog, “Donald Trump is indeed building a wall. That wall is one of bigotry, hatred and divisiveness between the American people and America and much of the rest of the world.”

On November 8, the American voters will have the opportunity to raise their voices and say “Mr. Trump. Tear down that wall.” They can also say, “You do not speak for me. We are stronger and better together than we are divided.”

Trump’s voice will be just another one among many American voices again.

In the interests of full and open disclosure, Frank Islam is on National Finance Committee for Hillary Clinton.