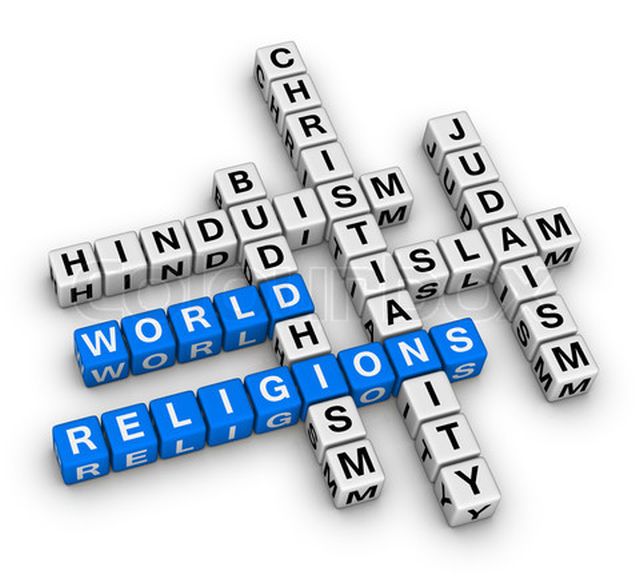 New Delhi : Religion is blamed for the “dirt it carries” but the fault lies elsewhere, says a timely new book on the subject given the difficult period India and the rest of the world is going through.

“Religion, as usually understood, is the outcome of the dynamics of spirituality, playing freely in a society. But unlike the world of matter, where the outcome of various forces working on an object can be predicted to precision, the forces of society, working out the application of spirituality, cannot be predicted to satisfaction,” writes Samarpan, a monk of the Ramakrishna Mission, in “The World of Religions” (Niyogi Books/pp 284/Rs 450).

The human mind is free and therefore has different levels of purity and unselfishness. Just as the purity of religion depends on the nature and character of its followers, the “not-so-noble” minds “invariably add dross to a religion” due to their incompetence and greed, writes the author, whose assumed name is Swami Samarpanananda, an alumnus of St. Stephen’s College, Delhi.

“The onlookers blame religion for the dirt it carries but the fault lies somewhere else” — in materialism — says the author, who examines in detail eight major world religions: Hinduism, Buddhism, Jainism, Sikhism, Zoroastrianism, Judaism, Christianity and Islam.

It’s quite “fascinating”, says the author, that every one of these has originated from Asia, today an area of major religious divide.

Noting that the present age, and possibly the coming years, belongs to materialism, Samarpan says “superficiality in the name of rationality, licentious in the name of freedom, greed in the name of a free market, and bloodbath in the name of ideology has grown to monstrous proportions” in what is his sixth book, even as the seventh is well on its way.

“Today, when every other young person believes in the truism ‘religion is irrelevant’, its standing in this e-age looks shaky. Will the high-tech generation of the future have anything to do with religion? Will they throng places of worship as their ancestors did?

“The answer is an emphatic yes,” maintains the author, who grew up in a traditional but liberal family in Bihar and studied in Delhi.

How did this book come about?

“When I joined the Ramakrishna Mission as a monk, some 40 years ago, a senior monk told me that it would be natural for me to know about my religion, but to grow I must read the sacred books of other religions too. That is how I got into studying about other religions with respect.

“It was fascinating for me to note how the masters from different religions were talking quite similarly (not entirely, though) about religion and religious experiences. This continued for most part of my life,” Samarpan told IANS in an interview.

Noting that it has been in his nature to explore the world of ideas by holding on to an idea as the rope to ascend that fascinating world where ideas are in their raw form, not limited by words or hindered by thoughts, he said: “It is this world in which a writer loves to meander to meet the unexpected and the unexplored. True creativity and originality come by moving effortlessly in this realm.”

Lamenting that the “blip and click” lifestyle of today does not allow the time to go deeper into subjects, Samarpan said: “Today we have a very narrow understanding of most subjects, including our own religion. And, we are hopelessly ignorant about other religions. Ignorance is the mother of all narrowness and intolerance.”

“So, I put years of my studying and contemplation into creating ‘The World of Religions’ with the hope that readers may have a quick overview of their own religion, as also that of other religions. As you might note, the book is a beautiful harmony of information, analysis and synthesis born of rigors and refined by the wisdom of masters,” he added.

What then is the essence of each of the eight religions he has written about?

“Every religion accepts that life is not merely about birth and death. The true nature of world is consciousness, known variously as God, Atman, Nirvana, etc. If one wants, one can attain that supreme state by making a sincere effort here and now. Real tranquility in life comes only after one has known his/her true nature that lies beyond worldliness.

“The goal of every religion is to make a person divine. Society, rituals, customs, etc., are secondary details. The fight all around that we see in the name of religion is not to be divine, but to impose one’s narrowness on others. How can someone who loves God be cruel towards the creation of God?

What of the future?

“I am more into thinking than into writing. I sincerely believe that ideas catch hold of you when your mind is calm and ready to hold it. When an idea enters you, it starts growing, and when it grows beyond the critical mass, it needs to be put down on paper. So, writing for me means waiting for ideas to grow slowly for years, and hence I don’t make plans, nor do I create projects for myself.

“For the present, I do have some powerful ideas taking up my mental space. So, I think some more books may come out. In fact, I am about to complete my seventh book “The Hindu Way: A manual for the Hindus”.

“Being a monk, I need to leave my future plans in the hands of the Divine, who, unknown to us, takes care of us and slowly but surely draws us towards Him by making us outgrow the world through our experiences,” Samarpan concluded.

(Vishnu Makhijani can be contacted at vishnu.makhijani@ians.in)