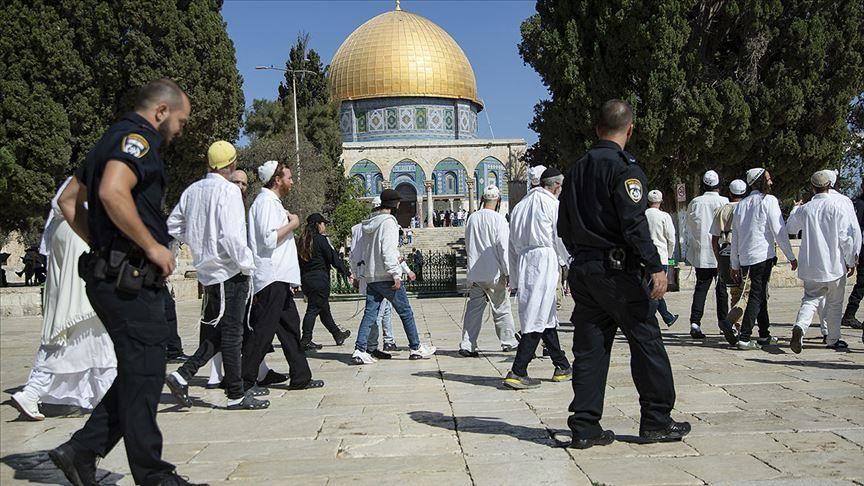 JERUSALEM – Around 50 Israeli settlers forced their way into the flashpoint Al-Aqsa Mosque compound in occupied East Jerusalem on Sunday, according to a Palestinian agency.

In a statement, the Jordan-run Islamic Waqf Department said the settler incursion came after a hiatus of three weeks.

According to eyewitnesses, Israeli police barred Palestinian youths from entering the site since dawn and imposed restrictions on the entry of worshippers into the complex.

Five people, including a mosque guard, were detained by Israeli police, the Waqf Department said.

Meanwhile, the head of the ultra-Orthodox United Torah Judaism Party, Moshe Gafni, called on Prime Minister Benjamin Netanyahu to keep the flashpoint compound closed to Jewish visitors, according to the KAN channel.

Tension escalated across the Palestinian territories since last month over an Israeli court verdict to evict Palestinian families from their homes in the Sheikh Jarrah neighborhood in Jerusalem in favor of settlement groups. The situation flared up after Israeli forces raided the Al-Aqsa Mosque and assaulted worshippers inside.

The tension spread to the Gaza Strip, with Israel launching airstrikes that killed at least 248 Palestinians, including 66 children and 39 women, and injured more than 1,900 others. Health authorities in the West Bank have separately confirmed 31 killed in that region, totaling 279 across all Palestinian territories.

Twelve Israelis were also killed in Palestinian rocket fire from the Gaza Strip. The fighting, the fiercest in years, came to a halt on Friday under an Egyptian-brokered cease-fire.

Since 2003, Israel has allowed settlers into the compound almost on a daily basis.

Israel occupied East Jerusalem, where Al-Aqsa is located, during the 1967 Arab-Israeli War. It annexed the entire city in 1980 in a move never recognized by the international community. -AA